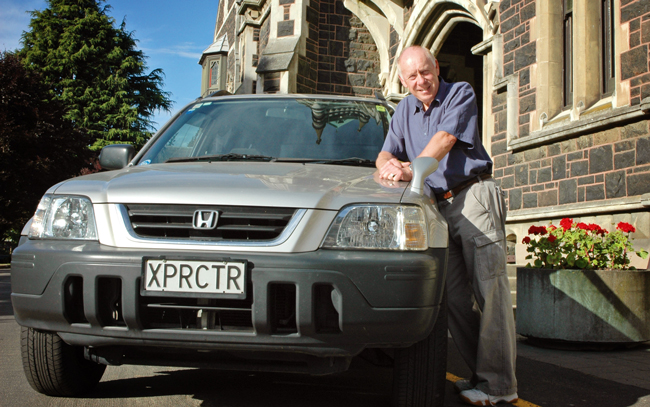 A memorial will be held at St Margaret’s College next Monday to celebrate the life of the University’s former Proctor, Ron Chambers, who passed away early last month aged 74.

Ron Chambers was Proctor for 21 years, from 1980 to 2001, and is remembered by those who knew him as intelligent, fair and funny, with a lilting Irish accent and a twinkle in his eye.

Ron Chambers was born in 1940 in Northern Ireland, growing up in the brick terraces of Belfast. After leaving school he flirted briefly with a trade (failing as a mechanic because he wasn’t good with his hands, explains daughter Sharon) before following in his father’s footsteps and becoming a policeman with the Royal Ulster Constabulary in 1961. His move to the police force was in part because he required a decent job in order to be “allowed” to marry girlfriend Ann.

"I think it was a high point for him in terms of his working life. He sums it up in his autobiography – “FUN”."

In 1973 with the “troubles” well underway in Northern Ireland Ron and Ann made the brave decision to emigrate to New Zealand with four small children. New Zealand was recruiting experienced policemen from the United Kingdom at that time.

In 1980 he became Proctor of the University – a job which made him essentially a guardian and protector of students, dealing with order and good behaviour if required.

Son Gary says he was “a perfect fit” for the role given his police experience and personality.

“I think it was a high point for him in terms of his working life. He sums it up in his autobiography – “FUN”. He certainly always had plenty of good stories when he came home at night. He also enjoyed campus life and managed to do a couple of History papers himself, something he was always very proud of.”

Those who worked alongside him at the University say his contribution to Otago was immense.

University Union Operations Manager Martin Jones, for whom Ron was a very dear friend, says he single handedly controlled the student population and maintained a level of discipline. 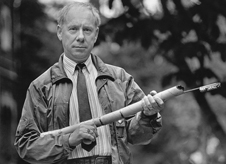 Ron Chambers in the aftermath of the 1986 ‘skyrocket war’.

“He let students have a good time, while at the same time controlling them so it didn’t get out of hand. Sometimes he punished them – sending them to clean toilets or remove shopping trolleys from the Leith – sometimes he turned a blind eye.”

“Sometimes I’d arrive for a visit and a chat and he’d have more than a dozen larrikins sitting cross-legged on the floor of his office as there wasn’t enough seats for some of the ‘groups’ he dealt with. They sat in dead silence dreading him asking them a question.

“He walked softly but carried a big stick. His favourite saying was “some people own up when they see the light…others when they feel the heat!” I can honestly say I never ever heard of anyone claiming that he hadn’t been fair; no one left his office feeling aggrieved.”

"I can honestly say I never ever heard of anyone claiming that he hadn’t been fair; no one left his office feeling aggrieved."

A feature of his office was the jar of jellybeans on his desk, complete with a sticker that read “Study in Sweden”, supplied to help relax the students sent to him to be disciplined.

The technique provided the title for his memoir Justice and Jellybeans, published in 2006, which explores his life from his early days as a policeman in Ulster; through to the 21 years he spent as proctor. His recollections form an alternative history of the University in the 1980s and 1990s. Capping stunts, orientation hijinks, student protests, skyrocket wars and inter-college skirmishes are all described from his proctor's-eye view.

He read this memoir on Radio New Zealand – which is currently re-broadcasting it and has uploaded it to its website.

He also discussed his book on Dunedin TV.

Son Iain, who works for the University’s Hocken Library, says his favourite quote from the book comes from the jellybean provision: “I had been in the job several years before I got the idea of having something sweet on my desk to help defuse some of the hostility and fear (yes, fear) that I sometimes saw in front of me. Students always seemed to believe that I had much greater powers than I actually had, and I was loath to correct this impression.” 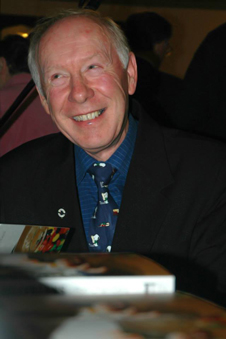 Ron Chambers at the launch of his memoir Justice and Jellybeans in 2006.

Daughter Sharon says publishing this book was a huge achievement.

“Dad was not an educated man (through circumstance as opposed to a lack of intellect) and it was such a proud moment for him to publish his own book. I’d say Dad discovered his ability as a writer when invited to review books for the Star. He’d always had a way with words but was a bit of a late bloomer when it came to writing. Eventually he was offered a weekly column that was always entertaining and well-received. Once retired, Dad was able to further indulge his urge to write, which resulted in Justice and Jellybeans.”

In 1999 Ron was made a life member of the Students’ Association, an indication of the esteem he was held in by students as well as his colleagues.

Ron was an avid reader and book collector, and a film buff with a passion for old movies. He also loved football (soccer) and motor racing.

During his time at Otago he founded an indoor soccer team, which went through various incarnations including being called “The Proctor’s Primrose Pickers” before settling on its final name, “The Flying Proctors”.

The team, which was made up of a mix of general and academic staff, took on the OUSA annually for a serious prize – a jar of jellybeans.

Mr Lindsay says, “We were all moderately old and full of our own belief that we were the best and most handsome players around. But we always beat the students!”

Daughter Sharon says the University was as much a part of him as he was of it. “The perfect retirement gift was, instead of the traditional watch, a personalised number-plate – XPRCTR – which became well-recognised around town.”

"He was a genuinely thoughtful intelligent man who always appeared to a have one’s best interests at heart."

In 2007 his wife Ann died, and in 2011 Ron moved to Auckland for the warmer climate and to be near two of his sons and his grandchildren – a family man to the end.

He will be remembered by all who knew him for his sense of humour, as a character, a gentleman, and a lovely man.

James Lindsay says everyone who knew him was better off for the experience.

“From the larrikins that he dealt with, to his friends, team mates and colleagues, he was a true gentleman. When he wasn’t matching his considerable wit with multitudes of bright-eyed students who thought they knew everything, but ran jarringly aground when they met Ron who had actually seen everything, he was a genuinely thoughtful intelligent man who always appeared to a have one’s best interests at heart.”

He is survived by his four children: Gary, Kevin, Iain and Sharon and four grandchildren.

His memorial service is a way for the University to remember and honour him. It will be overseen by Archbishop Phillip Richardson of the Anglican Church, who was Warden of Selwyn during Ron’s time at Otago.