Anthony Legg will ride 152km through the night as part of tomorrow's Midnight Express Challenge.

Two weeks is all Otago Business School Receptionist Anthony Legg has given himself to train for a 152km, overnight bike ride. But he is confident he will finish it.

Mr Legg is one of 40 “charity champions” in the Midnight Express Challenge, who will cycle the Otago Rail Trail from Middlemarch to Alexandra tomorrow night to raise funds for the Otago Community Hospice.

His ride is dedicated to Emeritus Professor Ian Jamieson of Zoology, who passed away on Monday evening at the Hospice after a long and brave battle with a brain tumour.

Cycling the Rail Trail has been a personal goal for Mr Legg for some time – but he says the “usual excuses” of work commitments, a new house and family – meant he never got round to doing it.

"I would like to ask all staff across all Otago campuses to forego their morning or afternoon coffee for one day and instead donate that $5 (or more if they wish) to the Midnight Express Challenge."

“A work colleague (Sandra Soeder) from the Economics Department happened to bring this event to my attention completely by accident and that was it – I just knew it was something I had to do. Not only to complete a goal, but to also help a great charity that deserves all the support it can get.”

But that was just two weeks ago, leaving very little time to train and gain sponsorship. Previously a keen gym “spin cyclist” who had “got lazy” Mr Legg took to the roads and hills of Dunedin to prepare.

“This event has been a great re-start for me as far as getting active again. I have had to train extra hard to get my fitness back on track. Last weekend I was out on a 50km ride with a group from the Midnight Express Challenge riding around the hills and dirt tracks behind Outram. That was a mission!”

He and his fellow riders, who include Dunedin Mayor Dave Cull, will set off at 5pm from Middlemarch, riding through the night and the dark.

“A night time ride does present a few extra challenges, mainly to do with safety and lack of scenery. Having a really strong light on my bike will help keep me alert by being able to see at greater distances. No one wants to ride for 154km being only able to see the back wheel of the rider in front!”

Each of the 40 riders aims to raise at least $1000, with the group hoping to be able to present at least $40,000 to the Hospice. Mr Legg has a plea for Otago staff: “I would like to ask all staff across all Otago campuses to forego their morning or afternoon coffee for one day and instead donate that $5 (or more if they wish) to the Midnight Express Challenge. If everyone gave just $5 the impact would be huge, and the goal of raising $40,000 for the Otago Community Hospice would easily be surpassed!”

Mr Legg says he would not have been able to do this ride without the support of his “chief fundraiser” Sandra Soeder, so he is dedicating his ride to the late Emeritus Professor Ian Jamieson – her mentor and friend. 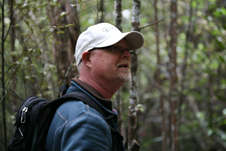 Ian Jamieson died on 2 February 2015 when he lost his battle against a brain tumour.

Ian had worked at the University of Otago for almost 25 years, being appointed to a three-year lecturing position in 1990. He retired in 2014 as full professor and was awarded, by the University Council, the status of Emeritus Professor.

Ian was an inspiring teacher and a world-renowned researcher, publishing almost 150 journal articles and book chapters. He worked across two fields of biology, starting off as a behavioural ecologist and, in the 1990s, branching out to become a conservation biologist. Ian’s work, using the latest genetic tools, utterly changed New Zealand bird conservation. His papers appeared in the top international journals and earned him a name as one of the world’s leading experts in conservation genetics.

In 2012 Ian was awarded the Ecological Society of New Zealand’s top prize, the society’s Te Tohu Taiao Award for Ecological Excellence in recognition of this conservation work.

There will be a service to celebrate Ian's life at Hope and Sons Chapel, corner of Andersons Bay Road and Oxford Street, Dunedin on Sat 7 Feb at 1 pm.