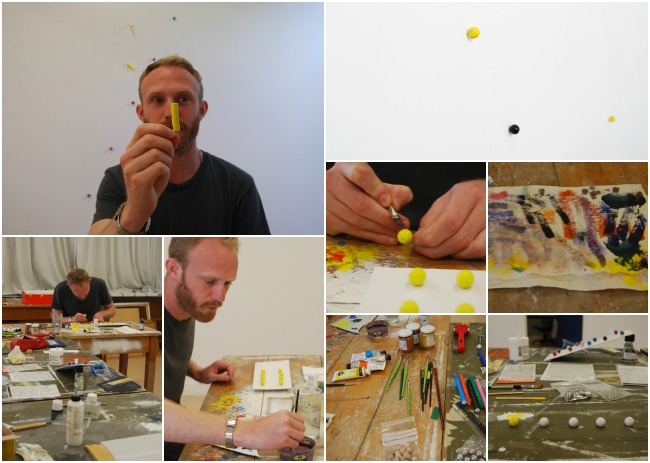 2014 University of Otago Frances Hodgkins Fellow in his studio.

In his first year out of Art School Patrick Lundberg renounced oil painting on canvas.

Instead, the talented painter and 2014 University of Otago Frances Hodgkins Fellow wanted to create works that felt lighter – both physically and emotionally – and took “time” rather than “space” as their structure.

And there is no doubt that his latest exhibition, Draft Copy, opening at the Hocken this weekend achieves these goals.

"For me it was inspired by that feeling of coming out of a stable institutional environment. All of a sudden life is a mess."

The arrangement of the pins within each of these sets is unscripted. Consequently each painting contains the potential for infinite, novel compositions.

"When I was an undergraduate in 2005, my work was large oil paintings on canvas," Lundberg explains. "But I found that way of working rather cumbersome. I wanted to do something that was lighter in its feel. So in my first year out I renounced this style. For a while I painted and drew directly onto the wall. The works could be painted over so they were only temporary. Gradually objects reasserted themselves in my studio practice."

Lundberg’s previous bodies of work have involved coloured string (2007) and used the gallery wall and its architectural features as a form of painting. In the group show Staging Space (2010), at Christchurch’s Physics Room he presented graphite tracings of the gallery’s spatial features. More recent ‘paintings’ include sections of found plaster board with layers of pre-existing paint that he has incised with a craft knife to create straight lines.

"When finished there should be a feeling that each part is irreplaceable. Each one contributes something."

"I want to make something that better slots into the fluidity of life," he explains. "For me it was inspired by that feeling of coming out of a stable institutional environment. All of a sudden life is a mess."

But if you thought these works look easy or thoughtless you would be mistaken.

When the Bulletin visited Lundberg in his studio late last year the works mounted on the wall were a testament to the care and effort put into their painting and arranging. In the wall around one finished piece were hundreds of tiny holes – indicating the number of adjustments and readjustments made to get the work right.

"I think the piece now is just about perfect. It is certainly better than it was three months ago." he says. "When finished there should be a feeling that each part is irreplaceable. Each one contributes something."

Born in Sweden 1984, Lundberg moved to Wellington at age six. He graduated with a Bachelor of Fine Arts from Elam in 2005, and has exhibited around New Zealand and overseas. In 2013 was a finalist for the New Zealand Academy of Fine Arts’ Parkin Drawing Prize, and last year was the University’s 47th Frances Hodgkins Fellow.

Holding the Fellowship puts in excellent company, alongside many of New Zealand’s most influential artists including Ralph Hotere, Marilyn Webb and Grahame Sydney.

He says holding the Fellowship and joining these ranks has been a huge honour and privilege – giving him the time and finances to get significantly more work done.

"In some ways it has been the little things, like not having to wait until the next pay day to buy some paint," he says. "Also, I have never had a studio this large. And this has meant that I have been able to work on lager suites of work and have more works on the go at any one time. In a smaller studio I could only have two to three works on the go so to make space I had to be quite decisive in finishing a piece and then packing it up. Here I have been able to edit my work more carefully; change it, take it down, look at it again."

His is work that does not transfer well to photographs and must really be experienced. Reactions are varied – but he is thrilled his work does get people thinking.

"The main thing for me is that I am true to myself."