"Humans of Otago" site a labour of love 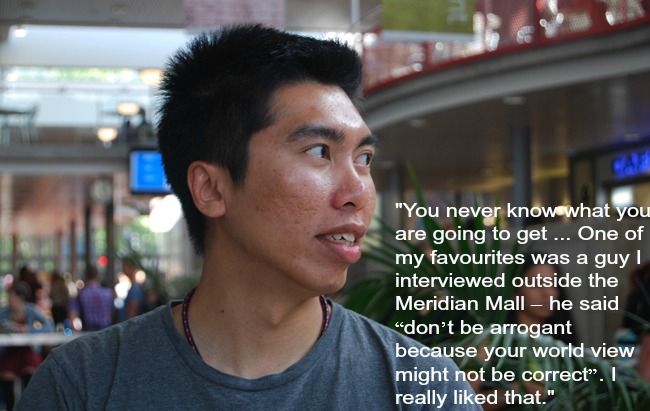 A passion for photography sees Otago Library IT Administrator David Xie fight his nerves on a daily basis to approach strangers around the University and Dunedin for his Humans of Otago Facebook page.

The site, based on Humans of New York, currently has more than 6000 followers – pretty good going since it was only launched in October.

Just like its namesake it features stunning photographs of individuals alongside brief quotes, providing an enlightening snapshot of that person.

In his morning tea and lunch breaks, Xie heads out to the streets, taking photos and asking questions. Processing the photos takes more time after work, and Xie estimates he spends two to three hours each day on this project.

But for Xie approaching people is tough, and the feeling of rejection when people decline to take part is the hardest aspect of the project.

“It has become easier since I began, but I still get butterflies in my stomach each time I do it,” he says.

Xie started the site as a way to promote himself as a photographer.

Originally from China, he followed his parents’ ambitions for him and studied computing. Now he is trying to establish himself as a freelance and wedding photographer, alongside his work for the University.

He uses advice and questions provided by Humans of New York, such as “What was the happiest moment in your life so far?”, “What's your greatest struggle right now?”, and “If you could change one thing in the world, what would it be and why?”

In a way the “average” answers here tell of a simplicity of life compared to New York, Xie says.

“In New York there are so many people with different backgrounds and struggles in life. Here in general people don’t have so many stories of failure and difficulties staying afloat.”

Even so, every person featured by Xie has something interesting to say.

“You never know what you are going to get,” he says. “You might think, “he’s just an average Joe” and then get a really interesting answer. One of my favourites was a guy I interviewed outside the Meridian Mall – he said “don’t be arrogant because your world view might not be correct”. I really liked that.”

Putting David Xie under the “Humans of Otago” microscope:

The Bulletin turned the tables on David Xie, using some of the questions from Humans of Otago/New York. His answers are just as enlightening as those of his subjects.

What was the happiest moment in your life so far?
The day that I graduated from high school and got into a university I’ve been ‘dreaming’ for in China. But after uni life starts, it’s nothing like what I was expecting; grades aren’t so important any more and you suddenly realise that life is so much more than just getting a top mark in exams.

What's your largest remaining goal in life?
I want to be an established wedding photographer; I’d like to travel the world and see different weddings with my camera.

Who's influenced you the most in your life and how?
I have a friend called Em who I met around two years ago through badminton. We spent a lot of time playing badminton together but more importantly, he’s a friend who’s not afraid of telling me the things I’ve been ‘doing wrong’ in life and giving me advice on what’s important and what’s not. My attitude towards life has changed since I met him and I’m very grateful to have such a friend.

What's your biggest fear/regret?
My biggest regret is actually not taking up photography as a profession earlier in my life. I was the easy going type who listens to parents regarding a career path and what course to take etc. But as you grow older, you start to realise deep down what you really want to do. I’ve started taking part time photography jobs from last year and hopefully I’ll get into it a bit more this year.

If you could give one piece of advice, what would it be?
Ask yourself what you want and stick with it no matter what other people will/might say. They’re not you and they can’t motivate you to do what they want all your life. At some point they’ll disappear and you’re left with yourself, if you’re not happy about what you have/you’re doing, you’ll be the only person to blame.