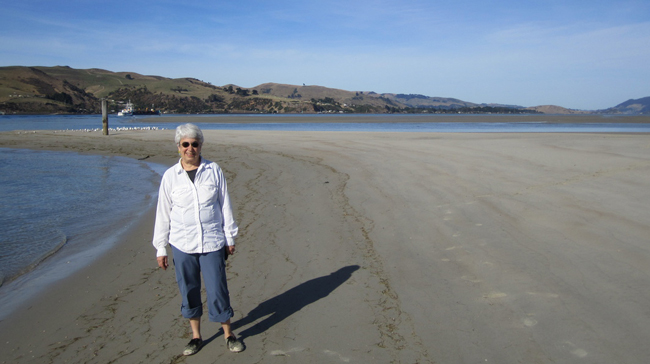 Professor Emerita Diane Paul enjoys all Dunedin has to offer.

It has taken until her fifth trip to Otago to achieve it, but Professor Emerita Diane Paul has finally become a cricket fan.

Professor Paul, Professor Emerita at University of Massachusetts Boston and Research Associate at the Museum of Comparative Zoology at Harvard University, first visited Otago about 25 years ago. It was a research collaboration which first drew her here, working with Professor Hamish Spencer, whom she had met when he was a PhD student at Harvard in population genetics.

Continued collaboration on their shared interest in the history of genetics has drawn Professor Paul back, and she is currently in Dunedin as a William Evans Fellow, hosted by Zoology and also supported by the Bioethics Centre and History. Professors Paul, Spencer, and John Stenhouse of History are engaged in a project on the history of eugenics in New Zealand. A conference on Eugenics in British Colonial Contexts that they organised took place in early February and work continues on a related book.

Despite his best efforts over the years, however, and those of his two sons, it has taken until Professor Spencer and his wife Professor Abby Smith took Professor Paul to the New Zealand versus Scotland cricket match earlier this year for his love of the game to be understood and shared.

Now, Professor Paul is fully immersed, joining fellow cricket fans at Abbey College, where she is staying, until late in the night to watch the World Cup. She laughs as she notes that she was last up during a recent game.

Professor Paul retired from teaching in 2003, to free up time for research, and has since travelled extensively as a Visiting Professor.

She describes the University of Otago as a “perfect storm of positives” in terms of its campus and people and although she could wish for a better public transport system, has delighted in being able to carry out her favourite pass time, clamming, in different locations around the region.

The tua tua still eludes her however, but perhaps, like the cricket, it will come in time.