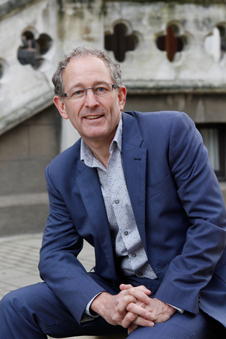 Otago’s Associate Professor Haxby Abbott has been announced as the new Editor-in-Chief of one of the world’s most prestigious physiotherapy journals, the Journal of Orthopaedic & Sports Physical Therapy (JOSPT).

The United States-based international journal is among the most highly ranked journals in the fields of orthopaedics and rehabilitation, and has been the top ranked physiotherapy journal in two of the past five years.

Associate Professor Abbott, who is based in the Department of Surgical Sciences, says it is a huge honour to be entrusted with this role.

“It is one of the two most widely read and respected journals in the profession of physiotherapy, worldwide. As official partner journal of 35 national organisations in 27 countries, work published in JOSPT has very wide potential influence.”

Associate Professor Abbott’s appointment resulted from an international search process, and this is the first time in the Journal's history that the Editor has been based outside the United States.

Associate Professor Abbott has been Assistant Editor JOSPT since 2011 and has six years’ experience as Editor-in-Chief of the New Zealand Journal of Physiotherapy. He has a strong background in high quality research and has himself has published extensively in a variety of journals, including JOSPT, Physical Therapy, Osteoarthritis and Cartilage, Journal of Clinical Epidemiology, and the Journal of the American Medical Association.

He will be responsible for material published in JOSPT beginning with the January 2016 issue.