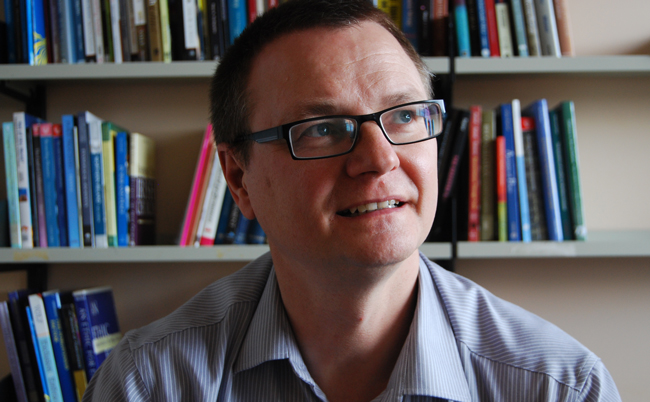 Moving from Belfast to Dunedin may seem like jumping from the frying pan into the pleasant surroundings of the sitting room across the other side of the house.

But David Tombs, the University’s new Howard Paterson Professor of Theology and Public Issues, says he is as fascinated by the opportunities ahead of him in Dunedin as he was by those offered by Trinity College's Irish School of Ecumenics satellite in Northern Ireland where he taught Peace and Reconciliation, or his earlier position teaching theology at the University of Roehampton in London.

"Me coming here is an opportunity to broaden my interests in public theology, broadly understood as the interface of theology with social, political, economic, environmental and cultural issues. My strongest background comes from my previous work on religious identities in multi-cultural societies, religious commitments to social justice and on religion and violence, and I am deeply influenced by liberation theologies," he says.

"Theology can help to re-frame familiar issues in creative new ways, and open up new opportunities for social transformation."

"Some of that work I want to continue but there are new areas I want to learn more about. For example, an interest in family violence, an interest in environmnental issues, and an interest in how those social justice issues work out in the New Zealand context - which will be different from when I looked at Latin America or how they appeared in Belfast or in London."

Otago’s Centre for Theology & Public Issues is the first research centre in New Zealand to examine political, social and economic issues from a theological perspective.

It is based in the Department of Theology and Religion and was founded in January 2009 by Professor Andrew Bradstock. Professor Bradstock returned to the United Kingdom for family reasons late in 2013.

Professor Tombs arrived to take up the role earlier this year. He says theology needs to have some added value and make some useful contribution to the public debate.

"It's not just about making some additional noise. It's about bringing an insight, bringing a perspective that might otherwise be missed in this debate. Theology can help to re-frame familiar issues in creative new ways, and open up new opportunities for social transformation."

As Director of the Centre for Theology and Public Issues he also hopes to continue the strong relationship that already exists with the Centre for Peace and Conflict Studies and strengthen links with other areas.

He will be teaching undergraduates and supervising PhD projects in public theology - on local, national and global issues – and will also pick up on his previous work in reconciliation.