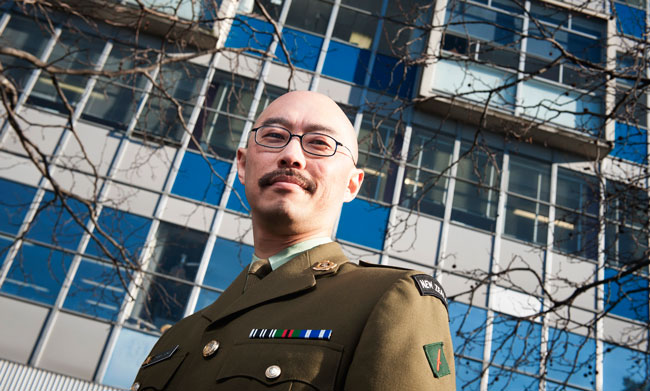 Associate Professor Darryl Tong of the Faculty of Dentistry, who today delivered the keynote lecture at a Royal Australasian College of Surgeons annual scientific congress in Perth.

New Zealand’s pioneers of facial reconstruction surgery were today remembered in a keynote lecture by an Otago academic delivered at a Royal Australasian College of Surgeons annual scientific congress in Perth.

In a lecture titled ‘100 years on – War Surgery of the Face and Jaws’, Otago dental academic and consultant oral and maxillofacial surgeon Associate Professor Darryl Tong charted the development of facial reconstruction surgery and New Zealand’s extraordinary contribution to the field.

“With the advent of the First World War, surgeons began seeing a lot more injuries to the face and jaw as trench warfare became more developed,” said Associate Professor Tong.

“During this time, New Zealand-born and raised Harold Gillies became the world leader in treating these types of injuries and is recognised as the father of modern plastic surgery.

“Henry Pickerill, the first Dean of the Dental School at the University of Otago was another leading pioneer in plastic surgery and was a contemporary of Gillies during the First World War.”

“This trend continued into the Second World War, with three out of the ‘big four’ recognised plastic surgeons in the United Kingdom also coming from New Zealand.

“It was during this war that Archie McIndoe and his Guinea Pig Club became famous.

“When one considers its size, New Zealand’s contribution to the development of facial reconstruction surgery is astonishing,” Associate Professor Tong said.

Associate Professor Tong, who is also a Lieutenant Colonel in the Royal New Zealand Army Medical Corps and the consultant maxillofacial surgeon for the NZ Defence Force, has served in Afghanistan and says there are striking similarities between the facial injuries suffered by soldiers today and those in the early 20th century.

“The types of wounds inflicted to the face have not changed much over the past 100 years. Many of the surgical principles pioneered by Gillies and Pickerill in the First World War still apply.

“We owe so much to these pioneering surgeons and yet they are under-recognised by New Zealand public in terms of their incredible achievements and the kudos they have brought to us as a country.

“The human cost of war is terrible, but it is a driving force for major innovation. The technological advancement over the past century has enabled the surgeons of today to render more efficient means of treatment, both aesthetically and functionally for our patients,” Associate Professor Tong said.

The Royal Australasian College of Surgeon’s Annual Scientific Congress runs from 4 to 8 May in Perth. The conference brings together the top surgical and medical minds from across New Zealand, Australia, and the rest of the world.