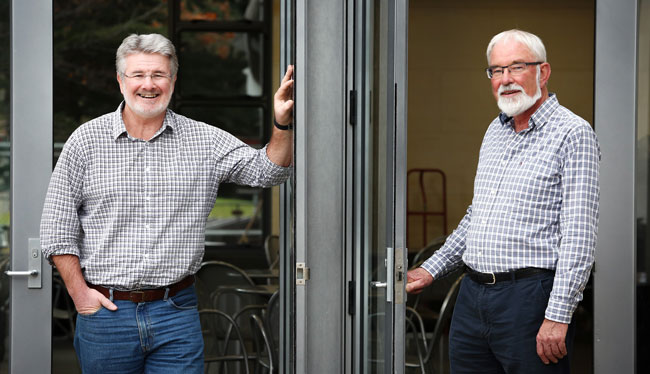 It could be thought that the University of Otago requires a certain look from its Provost: grey hair, grey beard, glasses, ready smile.

While their physical attributes are not compulsory for the role, their similar personality traits are certainly well suited to this difficult post. 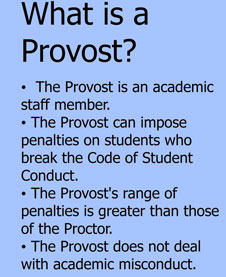 The role is largely invisible to the University community – so much so that when Professor Hodge was approached about it, even he wasn’t certain what was required.

“I felt honoured that people thought I was up to the role. But I confess I didn’t know what it was.”

The title Provost is different at different universities. Here at Otago it is a purely disciplinary role, dealing with the more serious types of misconduct of a non-academic nature.

The Provost is an academic staff member, independent from the Proctor’s Office.

The Provost has the power to impose penalties on students who transgress against the Code of Student Conduct. The range of possible penalties is somewhat greater than those of the Proctor, and the Provost can recommend to the Vice-Chancellor that a student be suspended from studying at Otago. The Provost also hears appeals against penalties imposed by the Proctor and attends Appeals Board hearings as the Vice-Chancellor’s nominee, in cases that involve the Code of Conduct.

"I felt honoured that people thought I was up to the role. But I confess I didn’t know what it was."

“I have been at Otago for 28 years. I was an undergraduate here myself and my daughter is in her third year here. I see this as an opportunity to contribute to the University in a different way. It is an important way, and someone needs to do it. I think it is particularly important that it is an academic rather than someone in the Proctor’s Office. That means they can be independent and unbiased.”

Professor Hodge grew up on a farm and has a sports background. His research focuses on the psycho-social effects of participation in sport, including prosocial and antisocial behaviour in sport, lifeskill development through sport and self-esteem and moral development in sport.

These research areas have implications for the role and he believes he brings common sense to difficult situations.

“I would like to think I have a clear understanding of the difference between student high jinks and serious misconduct. But if there is serious misconduct there must be a consequence. This isn’t the Wild West; the Code of Student Conduct applies.

"I am not sorry to be putting aside that responsibility, but I will miss the people I worked with and met in Registry, the Proctor’s Office and the OUSA."

“In my research I have been very interested in fairness and the understanding of right and wrong. I think it is really important that any punishment fits the crime, and that isn’t something I take lightly. I can recommend to the Vice-Chancellor that someone be excluded from the University for a period of time, but even one semester can really impact on a student’s time at Otago.”

Former Provost Professor Knight was in the role for 10 years. He says being in the position of deciding on and imposing penalties can be “unpleasant”, and it is often hard to recognise in the “well-spoken and remorseful, the drunken and impulsive miscreant from the previous night”.

“I am not sorry to be putting aside that responsibility, but I will miss the people I worked with and met in Registry, the Proctor’s Office and the OUSA.”

His advice for Professor Hodge is simple.

“It’s largely common sense. But with the best will in world mistakes get made, people tell lies, memory is fallible. A sense of humour helps. I am sure Professor Hodge will do a great job! I wish him all the best.”

For his part, Professor Hodge has one hope for his time in the role:

“Bob has done a fantastic job. I just hope I can live up to the fine standards he has set about fairness.”