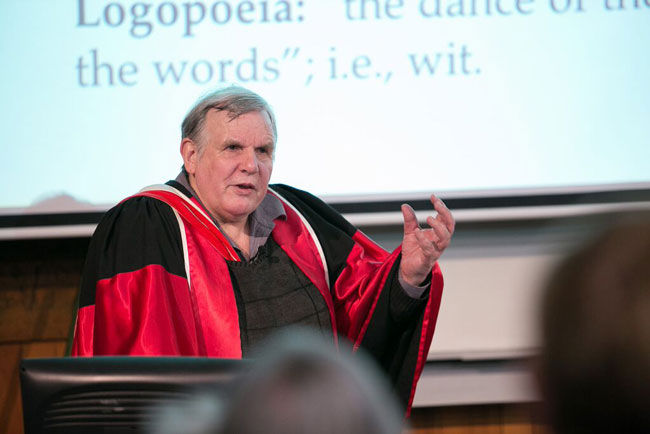 Emeritus Professor Chris Ackerley during his farewell lecture celebrating his retirement after 39 years as a member of Otago’s Department of English staff. Photo: Emma Allen.

“I had a moment in my youth, slightly inebriated, sitting on some Christchurch student flat floor, when I thought, ‘oh dear, I’ve fallen in love with literature’,” recollects Otago English Professor Chris Ackerley, who retired this month.

"Otago has been very good to me. The freedom to teach what I like the way I like comes with a certain responsibility, but it is a valuable freedom."

Professor Chris Ackerley’s farewell lecture “The Art (and Science) of the Limerick, with particular reference to James Joyce’s Ulysses” was held on 7 July – but he has no plans to become at all ‘retiring’. Just three days after the lecture he flew to join his daughter in Paris, and the list of literary projects he can reel off, plus continuing to assist the English department as an Emeritus Professor, shows his retirement is more a realignment of priorities.

After growing up in Ashburton, his love of literature led Professor Ackerley to complete undergraduate and Master’s degrees at Canterbury University, before travelling to Toronto, Canada, to do his PhD.

His teaching talents prompted Otago to hire him in 1976, before his PhD was completed in 1978 (not unusual at the time, he says, given competition from the US for academic staff).

“Otago has been very good to me. The freedom to teach what I like the way I like comes with a certain responsibility, but it is a valuable freedom. I have found Otago more liberal and generous than most universities – I never seriously thought about leaving. I’ve good colleagues and good friends - I have been part of a very lucky generation in some ways.

"Anyone who knows Chris has experienced his wit and iconoclasm, his depth of knowledge and honesty."

“I do regret that – it seems to me – the University is heading toward a kind of banality. The pressure to document every part of our life has encouraged a kind of managerial mentality. I don’t blame Otago; I think it’s the way the world has gone in many, many spheres. There isn’t the same tolerance of eccentricity that used to be part of the university experience.”

“His passion for his research and enthusiasm for teaching are among his most striking and enduring characteristics, along with his real pride in his students’ achievements. He has been consistently willing to take on new work, and a wide range of papers.

“Anyone who knows Chris has experienced his wit and iconoclasm, his depth of knowledge and honesty. He’s unafraid of taking a controversial point of view, but generally does so with humour and commitment to an obligation to question things.

“Chris reads across a variety of languages, he has represented New Zealand in bridge, he’s keen on opera and classical music – he’s a man of culture in the true sense.”