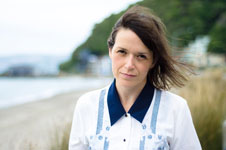 The University’s 2015 Burns Fellow Louise Wallace has this year been able to fulfil a long-held dream – to launch an online literary journal for writers under the age of 25.

The 32-year-old poet says her own experiences as a young author provided the inspiration for the recently launched journal Starling.

“I wanted to add something that seems to be missing in the New Zealand literary landscape. Australia has a similar journal, which has just published its 100th issue, but until now New Zealand hasn’t had a place specifically for young writers.”

Wallace, who grew up in Gisborne, says she found it hard to know how to break into the industry. A short creative writing course at Victoria University in Wellington “lit the fire” for her, but it was still hard to make the leap into the published world.

"Young writers are just beginning to find their feet both as a writer and a person. It is so important that they have somewhere for their voice to be heard."

“It is really difficult for young writers to compete for space with established writers,” she says. “This is an opportunity for them to have their own platform.”

The journal will showcase the best new poetry and prose from young New Zealand authors. Each issue will lead off with a new piece of work from an established writer and close with an interview with a person of note from the literary industry. In this way, Wallace hopes it will both provide a platform for emerging talent and create connections within the literary community.

“Young writers are just beginning to find their feet both as a writer and a person,” she says. “It is so important that they have somewhere for their voice to be heard.”

The first issue will be released in January, and the call is going out to young writers to submit their work. While there is no age minimum for the journal, accepted works will be of a very high standard.

Wallace asks University staff to help her get the message out – and emphasises that it is not just for students in the Department of English – there could be budding writers anywhere. 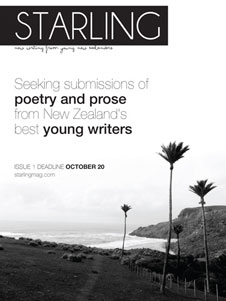 Works are now being sought for the first edition of Starling.

While Wallace has wanted to create this journal for some time, it has only been this year, with the time and space that the Burns Fellowship provides, that she has been able to do so. She has worked with short fiction writer Francis Cooke and poet and high school teacher Marty Smith to bring the idea to fruition.

“The Fellowship has been amazing. It is wonderful having so much time. It opens the pathways in your brain again. I can’t say enough good things about it. It’s fantastic.”

As well as launching Starling and focusing on her poetry, she is also using her time on the Burns Fellowship to research the place of dialogue in poems.

She says receiving the prestigious Fellowship has been an incredible endorsement of her work.

“It’s a huge boost to your confidence and also your career standing. When you look at the list of former fellows it inspires you to push yourself further and reach those heights as well.”