Imagination and senses stimulated at concert 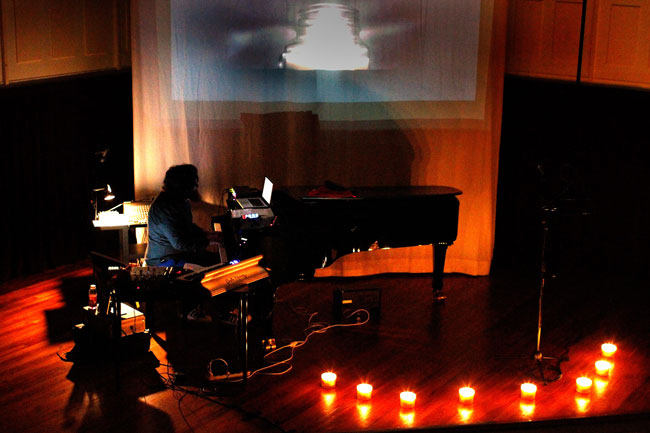 The University of Otago's 2014 and 2015 Mozart Fellow Jeremy Mayall on stage during his Imagined Landscapes performance at Marama Hall last night. 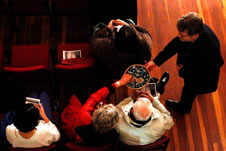 Sweets are given out during the performance as part of a multisensory musical experience. Photos: Sharron Bennett.

An audience last night experienced the weird, wide and wonderful world of the University’s 2014 and 2015 Mozart Fellow Jeremy Mayall, with a performance of a range of his different works at Marama Hall.

Imagined Landscapes: The Music of Jeremy Mayall featured a collection of works written during Mayall’s time at Otago: straight music, electronics, fixed media films and even multisensory works that experimented with taste and smell.

Just another day at the office for Mayall – who loves to collaborate with others on projects that push the outer limits of the musical experience.

Mayall, who has held the prestigious fellowship for the past two years, is known for his enthusiasm and creativity.

Last year he created Flutter, the world’s first multisensory musical experience, performed at the Otago Museum’s Tropical Rainforest Butterfly enclosure. The show combined taste, smell, touch and sight with the sounds of his music. It featured in the Bulletin.

And earlier this year he worked with Psychology’s Professor David Bilkey on a project exploring the relationship between music and the brain for Brain Health Week.

"This is such a stimulating environment. I try to make the most out of interdisciplinary projects - there are so many brilliant people in such a wide variety of fields here."

“I wrote a piece of music based on some readings I did about how music can impact the brain, then we did a presentation where we had someone hooked up to an EEG machine which showed the brain wave activity throughout the music. We are looking at potential ideas to explore this further.”

He is also in the early stages of a collaboration with the Department of Food Science developing the ideas behind the multi-sensory elements of Flutter - particuarly the link between taste and sound, and how the science in that can be used to augment and enhance the experience of the music.

Mayall has thrived in the University environment – taking up opportunities to collaborate wherever they arise.

“This is such a stimulating environment. I try to make the most out of interdisciplinary projects - there are so many brilliant people in such a wide variety of fields here.”

For Mayall, the opportunity to hold the Fellowship for two years has been incredible.

"I will keep composing and making music wherever I am, but it would be great to find an academic position at a tertiary institute."

“Firstly because having this position allows for such creative freedom and creative focus - it is a remarkable experience to be able to pursue music making in such an environment. Secondly, because it has allowed me to continue to build on the work from last year, the collaborations with people here in the Music and Theatre Departments, and also to meet up with people in other departments to explore the possibilities of more collaborations between art and science. It is very exciting!”

He plans to make the very most of the remaining time he has at Otago, and is “looking and pondering” what to do next year.

“I will keep composing and making music wherever I am, but it would be great to find an academic position at a tertiary institute. I really do enjoy teaching, plus that type of position would still allow some room for the pursuit of creative research through composition. So, I am keeping an eye and ear out for that type of job. I think it would be a great follow up to these two years of pure creative-research/art-making.”

His recordings they are all available online.