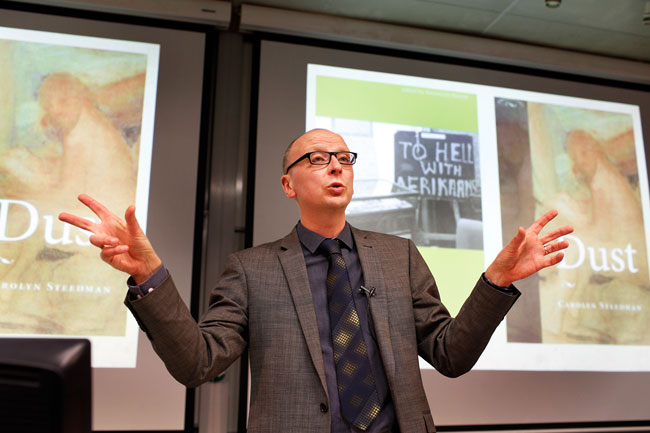 As Tony Ballantyne, Otago’s new Pro-Vice-Chancellor Humanities, prepares to depart as the Head of Department in History and Art History, he took the opportunity delivering the 2015 Hocken Lecture last week to reflect on the journey and philosophies that drive his own historical research.

Professor Ballantyne, who is also founding Director of the University’s Centre for Research on Colonial Culture, is considered a key figure internationally in shaping the “new imperial history” movement and he pioneered the “webs of empire” methodology for writing histories of colonialism.

His research, developed across 12 books and edited collections of essays and over 50 journal articles and book chapters, has examined the development of imperial intellectual and cultural life in Ireland, India, New Zealand and Britain.

"Reading these accounts of open violence was electrifying and armed with new enthusiasm, I had a new set of starting points for thinking about the early part of the mission’s history..."

His lecture, attended by around 170 people on Thursday, focused on the critical importance to historical analysis of archives that are primary sources; such as the letters, diaries and written remnants of the early missionaries held in the University’s Hocken Collection. In his lecture, the Dunedin born and “Caversham-raised” professor recalls how he felt when, immersing himself in the Alexander Turnbull Library, he came across an early archival source, a diary of missionary William Hall, detailing an account of a violent altercation between the diary writer and founding missionary leader Thomas Kendall.

“Reading these accounts of open violence was electrifying and armed with new enthusiasm, I had a new set of starting points for thinking about the early part of the mission’s history…,” he said in his lecture.

Archival primary sources should not be treated as “invisible repositories” nor should they relegated to the footnotes – but rather, they should be brought to the centre of historical analysis.

“(I) drew upon the rich stories of cross-cultural exchanges I found in the archives to challenge the conventions of authoritative versions of national history, whether the kind of bicultural histories developed by Judith Binney, Anne Salmond, Claudia Orange and James Belich, or the historical work produced for the Waitangi Tribunal,” he said.

“These works were all grounded in rich archival research and offered powerful narratives about very important aspects of New Zealand’s past. My concern with their approach, however, was the ways in which they tended to treat colonialism as a national process, too often abstracting New Zealand from its imperial context, ignoring connections and masking very important regional variations.”

He adds that reshaping public memory is dependent not only on the work of historians, but it is fundamentally underpinned by archives.

“The whole apparatus of the Waitangi Tribunal hinged on archival evidence. The ability of historians to marshal evidence to support the claims of iwi that the Crown had breached the Treaty was, and is, fundamental to operation of the claims and settlement process…. the canny strategies of Kai Tahu leaders like Matiaha Tiramorehu and parliamentarians H. K. Taiaroa and Tame Parata effectively constructed archives of grievance through their petitions, letter-writing and evidence-giving: they left a bright and dense archival trail which was pivotal to later generations of Ngai Tahu in their struggle to settle their claim.”

This had paved the way for new historical visions, and new ways of thinking about the tribal past.

“This something that Tipene O’Regan’s Hocken Lecture suggested would be one key cultural outcome of settling…..the claim had dominated Ngai Tahu’s internal politics, had shaped the iwi’s collective sense of self, and defined the iwi’s understanding of its history. But, he had stressed, the resolution of the claim and the return of some significant resources to the iwi meant that new types of history would emerge.

“We have seen that here at Otago,” he says, quoting Otago historians Angela Wanhalla and Michael Stevens’ work.

He stressed that while historians had to engage with contemporary questions, their professional and moral duty was deeply connected to archives.

Professor Ballantyne continues that more recently, some literary scholars and postcolonial writers have suggested that colonialism in New Zealand functioned as a kind of erasure, or an extended silencing. Stressing the archival riches to be found, he suggested that this view of colonialism as a silencing “fundamentally misreads the cultural terrain of colonial New Zealand.”

“This was a colony that was shaped by the cultures of the Word: where prolix societies collided, arguing, writing and reading. Colonists built libraries, established newspapers, read voraciously and wrote histories at alarming rates; many Maori were also enthusiastic readers, newspaper subscribers and skilled writers. The argumentative and print-saturated nature of colonial life as well as a rich tradition of collecting means that our archives are very full, especially when viewed in comparative terms.”

As Angela Wanhalla and Lachy Paterson’s project He Reo Wahine is showing, even the social group we thought was the most under-represented in archival holdings – Maori women – in fact produced rich veins of texts that illuminate the shifting aspirations of wahine, the transformation of te ao Maori and the changing shape of colonial society as a whole.

“Archival collections are crucial because they are the fonts of public memory, and they will be the starting point for many histories yet to be imagined, yet to be written. Those future possibilities are very precious; they are exciting. They require us to be vigilant about the institutional health of our archives and underline the crucial role of archivists, librarians, and curators as well as historians.

Our archives – such as Hocken Collections - are vital repositories, storehouses of knowledge, treasure houses: they are a crucial foundation of an open society, of democratic culture, and they underwrite the possibility of grappling with the meaning of the past.”

Professor Ballantyne attended King’s High School in Dunedin, then enrolled at Otago, graduating with a BA(Hons) in History in 1993. He was awarded a Prince of Wales Scholarship to Cambridge to undertake a PhD which he gained in 1999. Before returning to Otago to join the Department of History and Art History in 2002, he held faculty positions at the National University of Ireland and the University of Illinois.

"Tony Ballantyne has an international reputation as an outstanding history researcher, as well as a record as a collegial and engaging leader."

Last week, Vice-Chancellor Professor Harlene Hayne announced his appointment to the position of Pro-Vice-Chancellor Humanities, which comes into effect on 1 October.

“Tony Ballantyne has an international reputation as an outstanding history researcher, as well as a record as a collegial and engaging leader. He is well placed to take the helm of this key Division of the University and build upon its internationally-recognised strength in teaching and research. At a time when the value of the Humanities is constantly being questioned, Professor Ballantyne is the ideal person to remind New Zealand about the cultural, civic, and economic value of research and education in Humanities subjects.”

In his new role, he succeeds Professor Brian Moloughney, who is stepping down after leading the Division of Humanities for a five-year term. Professor Hayne warmly thanked Professor Moloughney for his dedicated leadership and service to the University. He will join the Department of History and Art History in a teaching and research role.