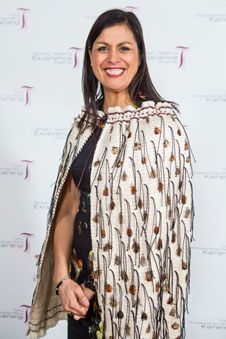 Associate Professor Suzanne Pitama in the korowai at the Tertiary Teaching Excellence Awards.

Associate Professor Pitama was presented with the award at the national Tertiary Teaching Excellence Awards held at Parliament. This is the fourth year in a row that this award has been won by an academic from the University of Otago.

The muka (flax) and feather korowai, completed just a few months ago, was passed on to Associate Professor Pitama by last year’s winner, her friend and colleague Otago’s Dr Karyn Paringatai. She will keep the korowai for a year, handing it on to next year’s winner.

Associate Professor Pitama is the Director of the Māori/Indigenous Health Institute (MIHI) at Otago’s Christchurch campus. Her 14-year teaching career is distinguished by innovation and leadership – working tirelessly towards improving health in Māori communities with a commitment to redressing the inequity between Māori and non-Māori on issues relating to illness.

Her teaching is student-centred; striving to educate medical students to work alongside Māori patients, whānau and communities in ways that support best clinical practice and reduce Māori health inequities.

"She’s constantly striving to understand how we best learn so that she can improve how she teaches things."

An international colleague describes her teaching programme as “the most comprehensive Indigenous health curricula (in medicine) in Australia and New Zealand.”

She initiated Hauora Māori Day in 2010 as a student-led initiative where 100 fifth-year medical students and 35 clinical staff provided free health screenings to the Māori community. The event was so successful it has been undertaken annually since.

Seeing a need to increase cultural competency amongst teachers and learners across medical schools, Associate Professor Pitama has written and filmed instructional videos for Māori and non-Māori clinicians and students.

In 2010, she developed two Māori models of health, The Hui Process and The Meihana Model; both of which directly connect Te Ao Māori (the Māori World) with clinical practice. The Hui Process teaches students how to engage with a Māori patient and their whānau, interweaving clinical practice throughout each stage. The Meihana Model helps students to complete the Kaupapa component of the clinical interaction/assessment so they achieve both clinical and cultural integration in their practice.

"On behalf of the entire University community, I warmly congratulate Suzanne, along with Roslyn and Rachel, on their outstanding achievements. We are very proud of them all."

These models have now been integrated into the Māori health curriculum across the University of Otago’s three clinical schools, medical schools at other tertiary institutions, government departments and a broader range of health providers.

In a video made about her win, Associate Professor Pitama says she aims to give her students the opportunity to “learn as opposed to being taught.”

Her students describe her as enthusiastic, positive and personable.

“She makes an effort to make you feel like you’re important and what you’re learning is really important,” one student said. “She’s constantly striving to understand how we best learn so that she can improve how she teaches things.”

The Awards celebrate New Zealand’s finest tertiary teachers – as recognised by their organisations, colleagues, learners and broader communities. A total of 12 awards were presented last night for Sustained Excellence in Tertiary Teaching – under General and Kaupapa Māori categories. Each awardee receives $20,000. The Supreme Award, worth $10,000, is considered the ultimate prize.

University of Otago Vice-Chancellor Professor Harlene Hayne says she is delighted that Associate Professor Pitama has joined the distinguished roll of Otago staff recognised through the Supreme Award.

“On behalf of the entire University community, I warmly congratulate Suzanne, along with Roslyn and Rachel, on their outstanding achievements. We are very proud of them all.”

As well as last night’s success for Associate Professor Pitama making it the fourth year in a row that Otago academics have won the Prime Minister’s Supreme Award, it also marks the sixth time in the past 13 years that the honour has gone to a teacher from this University.