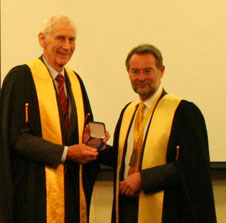 An orthopaedic surgeon who has taught medical students at Otago’s Christchurch campus for 50 consecutive years has been awarded New Zealand’s most prestigious surgical prize.

The Medal commemorates the life and work of the late Colin McRae, an outstanding New Zealand surgeon and former RACS President.

Emeritus Professor Rothwell said it was a tremendous privilege to receive recognition for work about which he was truly passionate.

“To receive the Colin McRae medal is certainly a great highlight to crown the end of my career. I had the pleasure of working alongside Colin McRae and to be given an award in his name truly is an honour.’’

Emeritus Professor Rothwell was appointed an Officer of the New Zealand Order of Merit for services to orthopaedic surgery in 2006. In 2009 he was awarded the Gold Medal for Excellence in Teaching by the Christchurch campus and 2015 marks his 50th consecutive year of teaching medical students.