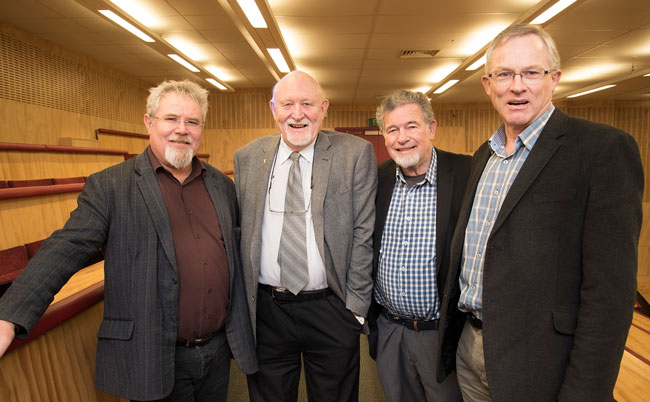 Professor David Fergusson’s success in encouraging evidence-based social policy, and many other accomplishments over his long academic career, were acknowledged in a day of lectures last week.

The Christchurch campus hosted a day of lectures last Friday to celebrate his career.

The CHDS is widely acknowledged as one of the best and most productive in the world. Professor Fergusson and his team have tracked the health and psychosocial development of more than 1000 children born in Christchurch in 1977. Evidence from the study has contributed to significant changes such as the removal of lead from petrol, laws requiring the fencing of residential swimming pools, and has enlightened debate by providing an evidence base on key social issues such as suicide, abortion and child sexual abuse.

Professor Fergusson says he has always asked questions of participants that are relevant to policy makers. He is a staunch believer that health and social policy should be evidenced-based and subject to rigorous evaluation.

Professor Fergusson is particularly proud of being part of the development of the successful early intervention programme for at-risk children, Early Start, and implementation of the Incredible Years Parent and Teacher programmes aimed at reducing childhood behaviour problems.

Professor Fergusson says one of the key tasks of Associate Professors Horwood and Boden will be to extend a Health Research Council-funded study into the effects of the Canterbury earthquakes. In a fortuitous coincidence, about half of the CHDS’ participants were in Canterbury at the time of most of the severe quakes. This means they can be compared to those who were not present.