2015 Supervisor of the Year named 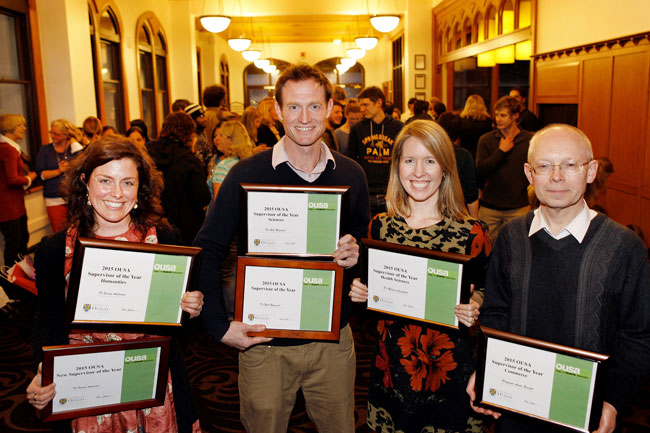 For Marine Science’s Dr Will Rayment, it wasn’t his work with whales that was being rewarded this week, but his supervision of postgraduate students.

Dr Rayment was named the University of Otago, OUSA Supervisor of the Year at an event at the Staff Club. He was also the Sciences Division award winner.

"Whenever you have to cut great candidates to find a special few, you know the University is doing well."

He was joined on the winner’s podium by Dr Vivienne Anderson, of HEDC, who was named New Supervisor of the Year and Humanities Division winner.

Dr Rebecca Campbell, of Physiology, was announced as the Health Sciences awardee, and Professor Andre Everett, of Management, rounded out the winners, taking the Commerce Division award.

“Supervisors spend a great deal of time guiding postgraduate students as they work towards their research degrees, such as Masters and Doctorates across a wide range of disciplines.”

Jackson was pleased to see so many nominations this year: “Whenever you have to cut great candidates to find a special few, you know the University is doing well.”

He says the awards were “a great opportunity for supervisors, their families, and their students to celebrate a job well done”.