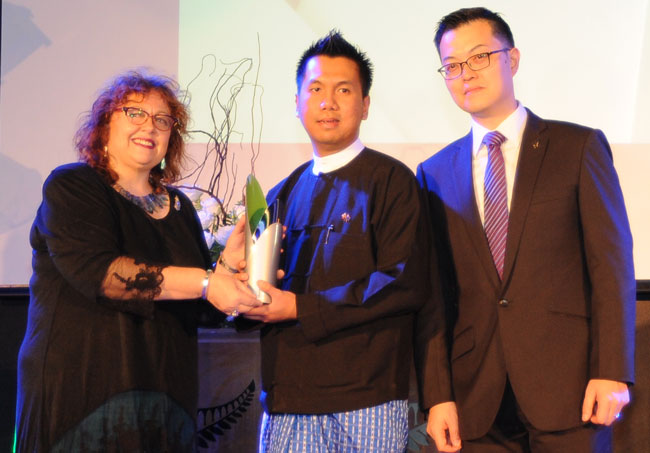 A University of Otago postdoctoral fellow has received a New Zealand-ASEAN Award for his work in bringing New Zealand and his home country closer together.

Dr Htin Lin Aung of the Department of Microbiology & Immunology is one of 40 people to be honoured by the New Zealand Government for significantly contributing to New Zealand’s deepening relationship with the Southeast Asia region.

The 40 awards celebrate the 40th anniversary of formal partnership between New Zealand and the Association of Southeast Asian Nations (ASEAN), which is a political and economic organisation of 10 countries in the region with a collective population of 625 million.

"He has taken a leading role in establishing a valued collaboration between the University of Otago and Myanmar health sector institutions."

Dr Aung’s award was presented to him alongside three other Myanmar recipients at a ceremony in Yangon earlier this month.

The citation for his award noted that “his commitment to Myanmar is to their health sector through his expertise in microbiology and molecular biology. “He has taken a leading role in establishing a valued collaboration between the University of Otago and Myanmar health sector institutions.”

Dr Aung, a former student of the University of Otago, says that he was very proud and honoured that his efforts are being recognised through the Award and that he was able to represent the University, which is very supportive of the research collaboration with Myanmar.