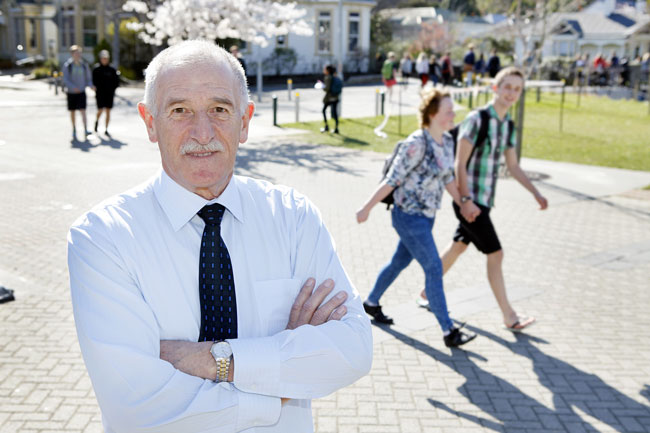 The Bulletin Board caught up with him as he finished up this mixed and demanding position.

The role of University Proctor is one which provides a good number of stories.

There was the time in 2004, for example, when a student who hadn’t studied enough created a bomb-lookalike which he left in a bag outside the room of his exam.

His plan was that it would be found and the exam postponed, providing him with some extra study time. It didn’t work out like that, retiring Proctor Simon Thompson explains.

“No invigilator ever saw it and it was not until clean-up time that the bag was found. When it was found it was handed from person to person and everyone agreed it was probably a bomb. They used a radio to say they were taking it in a car to the Registry Building. It was about now that I was advised and galloped over there. It was very realistic but a closer inspection revealed it for what it was. I did manage to identify the student responsible and we had a chat.”

"It took a couple of years but they have achieved a quite amazing turnaround."

The intervening years have seen vast changes in the way the University manages student discipline and pastoral care. When Mr Thompson began he was it. There was no Deputy Proctor and no Campus Watch, and for his first five years in the role, that was how it remained.

“I was fighting a losing battle on my own,” he says.

“The addition of the Deputy Proctor position in 2006 was a big help, but two people cannot cover the Campus on a 24 hour basis.

“Creating Campus Watch was a big task and it was not until I got approval to employ the Campus Watch teams that we began to get control back on the street. Police did not believe there were major problems in the Campus area because they never got any complaints. With no complaints that of course meant there was no problems.”

Mr Thompson says it was not until the Campus Watch teams hit the streets in 2007 and began submitting reports that the extent of the problem became clear.

“Even then, it was pretty much left to them to bring some semblance of order back to the streets. It took a couple of years but they have achieved a quite amazing turnaround.”

Mr Thompson is rightly proud of their achievements. Campus Watch has reduced thefts from student flats by over 40 percent, reduced laptop thefts from the libraries from around 30 a year to two or three a year, and has hugely reduced the amount of broken glass on North Dunedin streets.

“It has now got to the stage that the media will report that there has been ‘a’ couch fire – as opposed to the six or seven a night there used to be – and sometimes has to resort to old archive photographs of burnt couches to support stories.

“Campus Watch has been so effective that they are now able to move from a primarily enforcement role to a pastoral care role.”

"I feel that I have taken the position as far as I can and it is now time for someone else to perhaps take it in some other direction."

Mr Thompson came to the role of Proctor following 30 years in the Police.

He says he is ready for retirement – and ready to hand over the reins.

“I feel that I have taken the position as far as I can and it is now time for someone else to perhaps take it in some other direction.”

That someone was name last week – Ministry of Justice official Mr Dave Miller begins in the role on Wednesday 28 October.

Mr Thompson’s advice to Mr Miller is simple: “Don’t laugh when the students tell you the reasons for their ‘errors of judgement’.”

He says he will miss Otago’s students and staff, but explains he will have plenty to do in retirement.