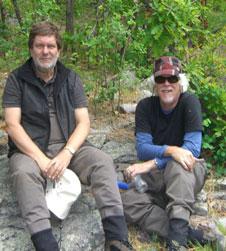 Thirty-three years ago, when Emeritus Professor Colin Townsend began co-editing the international journal Freshwater Biology, every aspect of publishing made use of paper, typewriters, coloured ink and the postman.

“In our time we have accepted more than 4000 papers but rejected almost 13,000, which makes for a large number of disappointed authors,” he says. “Some years ago, Alan went on a post-conference tour cruising round the Danube delta with about a dozen well known aquatic ecologists. One of them noted that it was rather like Agatha Christie’s ‘Murder on the Nile’ – but who should be murdered? They all agreed it should be Hildrew, as he had rejected at least one paper by each of them!”

"In our time we have accepted more than 4000 papers but rejected almost 13,000, which makes for a large number of disappointed authors."

Indeed, the pair has even each rejected a paper written by the other.

“We hope that, in the end, murder is not in the hearts of most of our authors and indeed we salute the grace of so many who have accepted our decisions without demur and sometimes even with expressions of gratitude.”

Professor Townsend has been with Otago’s Department of Zoology since 1989 when he arrived from England to become department head. He is ‘almost retired’, with a 0.1FTE appointment while concluding a long-standing research programme.

Last year he won the 2014 Award of Excellence of the Society for Freshwater Science, the leading international body with a focus on stream ecology. The award recognised his research contribution to freshwater science, especially the ecology of streams and rivers, and also his 33-year editorship of Freshwater Biology.

During his tenure, growth in the journal was rapid and sustained. Freshwater Biology, which began life in 1971, published fewer than 50 papers per year in its first decade or so but is now publishing over 200.

“The growth in submissions has been even greater, from fewer than 100 per year before 1982 to over 700 in 2014 and we had to become more choosy: our acceptance rate fell from more than 40 percent in the early years to less than 25 percent today.”

Emeritus Professor Townsend explains that a particularly abrupt change occurred in 2005/06 when submissions increased from 377 to 509, coinciding with the introduction of electronic submission, now almost universal.

"As long as promotions, appointments and prizes are driven by publications in prestigious journals, the journal title will matter."

“Most people will find it hard to believe that when we began our term every aspect of publishing - submission, referees’ reports, editing and dispatching final copy to the publishers – made use of paper, typewriters, red ink (Colin) or green (Alan), and the postman.”

Emeritus Professor Townsend says over the past 33 years the world of science publishing has changed profoundly.

“Readers now do not go to a library and browse the stacks for their favourite paper journals. Researchers get emails or tweets about new papers and tables of contents. The identity of the journal as a whole is in some respects now far less important, or even evident, to students than formerly, except in one crucial respect; yes, it’s the dreaded Impact Factor! As long as promotions, appointments and prizes are driven by publications in prestigious journals, the journal title will matter.”

So what will Emeritus Professor Townsend do now he has stopped receiving about five manuscripts every week to deal with?

“It seems like a good time to move on to write the fifth edition of my textbook - Ecology: Individuals to Ecosystems (co-author Michael Begon) - which is used by universities around the world and has been translated so far into nine languages,” he says.