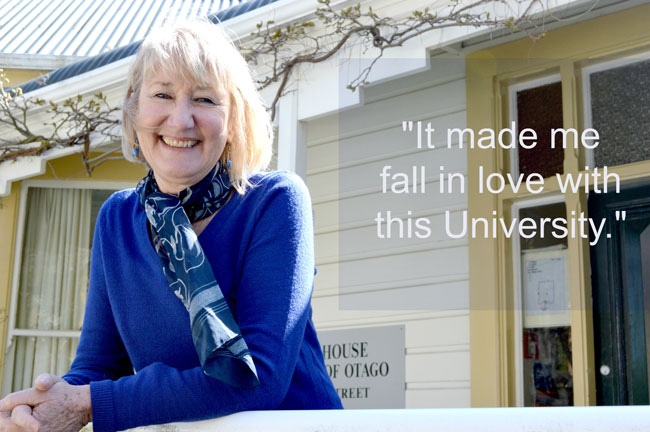 Luck, a willingness to take up opportunities and her obvious warmth, tenacity and capability have seen Alison Finigan travel a career pathway like no other in her nearly 27 years at the University of Otago.

Mrs Finigan, Head of Alumni Relations, retires this month. She spoke to the Bulletin about her journey from part-time secretary in the Department of French to globe-trotting Alumni Relations Manager.


In 1989, with a Master’s degree in French and three small children, Alison Finigan took up her first position at the University of Otago: part-time secretary in the French Department.

What she did not know then, was where this relatively humble beginning would take her.

Some 10 jobs and 26 years later, she is retiring. A function at Unicol yesterday highlighted the impact she has made at this University and the esteem in which she is held by her colleagues.

During the at times emotional Bulletin interview in the Staff Club this is also clear. Many of her colleagues wave or stop and chat. They like her. And they are sad she is leaving.

But for Mrs Finigan the time for retirement is right. And she looks back at her time at Otago with pleasure.

"I remember arriving at Auckland airport, and meeting the others I would be travelling with and feeling like I didn’t know anything about how to do this job. But then I remembered I had done acting and theatre sports, and I thought ‘I can pretend until I can do it’."

It was in 1997, when working as a Scholarships Officer, that her career took a surprising turn, she explains.

“I was called into my boss Neil Scott’s office, where he told me he had another job for me. There was a conference in Miami that lots of agents from Latin American institutions would be attending, and he wanted me to go and promote Otago.

“My first reaction was ‘Why me? I’ve never done anything like this in my life!’ but I said OK on the spot.”

She obviously did well, because on the back of this first trip she was asked to spend a month in Brazil, Chile and Argentina with representatives from some of New Zealand’s other universities, exploring opportunities for the University of Otago.

“I remember arriving at Auckland airport, and meeting the others I would be travelling with and feeling like I didn’t know anything about how to do this job. But then I remembered I had done acting and theatre sports, and I thought ‘I can pretend until I can do it’.”

Pretending or not, she again more than managed. Her career that followed has been a travelling one.

In 2003 she took up a role in the International Office as Head of Student International Services, marketing to study-abroad students in the United States. In 2007, she became head of the Alumni and Development Office, travelling the world attending alumni events. And last year she took up her final Otago position: Internal Engagement Manager – supporting entities within the University to strengthen their relationships with alumni.

“I’ve had the most wonderful serendipitous journey working for this place,” she says. “I’ve had the privilege of seeing various part of the University at work, and gaining an understanding of how it all comes together. When you see the moving parts you can see where the big progress is being made.”

One of her fondest memories though, is of these early days and the camaraderie of the French Department.

“As a first experience it was fantastic. It made me fall in love with this University.”

"I’m constantly amazed at the successes of alumni, and how they attribute their successes in a large part to the education they got here at Otago."

Her roles have, too, allowed her to see from the outside the love others have for this University.

“I’m constantly amazed at the successes of alumni, and how they attribute their successes in a large part to the education they got here at Otago.

In her two-and-a-half decades here at Otago she has seen many changes – but she says underneath it all, the University has remained the same.

“Things change, entities come and go, and that can be a painful process, but overall the thing that is constant is the wonderful young people that come in.”

Mrs Finigan is looking forward to stepping into her new life, and plans to pick up some study, garden, and get back into French.

She also plans to travel for fun.

“I’ve never spent much time in France. I’m going to learn the language required to shop instead of the French I used in my degree, which let me talk about literature.”