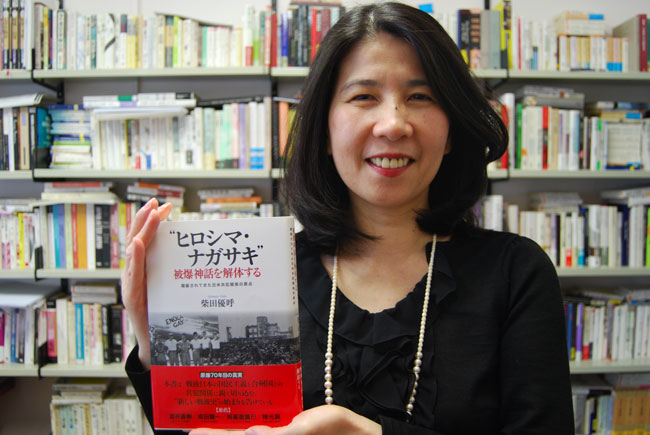 Dr Yuko Shibata, who will speak at the Japan Press Club later this month about her book Hiroshima/Nagasaki debunking a myth of the hibakusha’s experience.

An Otago academic has received an invitation to speak at the Japan National Press Club – a very rare and prestigious honour.

Dr Yuko Shibata, a lecturer in the Japanese Programme of Otago’s Department of Languages and Cultures, will travel to Japan later this month to speak to the Club about her book Hiroshima/Nagasaki debunking a myth of the hibakusha’s experience.

The Japanese Press Club is the organisation of the Japanese media. So far this year its speakers have included President Aquino of the Philippines and ‘Rock Star’ Economist Professor Thomas Piketty. In 2013 it had Aung San Suu Kyi, and in 2009 it hosted the Prime Minister of Finland.

This year, to mark the 70th anniversary of the end of the Second World War, the Club is focusing on this post-war period.

"Most hibakusha (atomic bomb victims) are passing away and we are losing the opportunity to listen to their first-hand experiences."

“The managing director asked me to talk about my recently published book in Japanese,” Dr Shibata says. “This is honourable and an extraordinary rare request for a novice author like me.”

Dr Shibata’s book was published in Japanese in August. In it she radically questions the ways in which knowledge on Hiroshima and Nagasaki has been configured in postwar Japan.

For Dr Shibata, a former Japanese journalist, it will be a new experience to be on the giving end of a press conference.

“I will talk about the importance to look beyond national borders. It is especially so, considering the significance of Hiroshima and Nagasaki for all of us on earth. Most hibakusha (atomic bomb victims) are passing away and we are losing the opportunity to listen to their first-hand experiences. We should contemplate what the experience of Hiroshima and Nagasaki means to us and the future of the globe.”

Dr Shibata plans to re-write her book for an English-speaking audience in the near future.