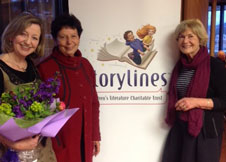 Otago’s Trish Brooking has received the 2015 Storylines Betty Gilderdale Award for outstanding service in the field of children’s literature, in recognition of the far-reaching influence she has had on children’s writing in New Zealand.

The Residency is the only fellowship available to children’s authors at any New Zealand tertiary institution. Created in 1993 it has attracted award-winning authors such as David Hill, Ken Catran, Kyle Mewburn, James Norcliffe, Fleur Beale, David Elliot, Diana Noonan, Penelope Todd, Sandy McKay, Joanna Orwin, Ella West, Leonie Agnew, Melinda Szymanik, Jennifer Beck and Robyn Belton among others. Earlier this year former Writers in Residence featured prominently in both the Library and Information Association of New Zealand Aotearoa (LIANZA) awards and the 2015 New Zealand Book Awards. Ms Brooking is one of the main organisers of the Residency. She applies for funding from Creative New Zealand to help finance it and reports back to them, is on the selection panel and acts as the main point of contact for the writer when they are at the College, introducing them to staff and answering any questions they might have.

"We are grateful that her tireless efforts are being recognised by the wider community of those advocating for the important place of children's literature."

Storylines Chairperson Dr Libby Limbrick says this award honours not only Ms Brooking herself, but the University of Otago, and before that the Dunedin College of Education’s commitment, along with Creative New Zealand, to maintaining the Residency over two decades.

“For these writers, the Residency provided not only invaluable writing time, but an acknowledged boost to their writing careers,” Dr Limbrick says.

“Oftentimes the incredible effort and ongoing advocacy for the continuation of a scheme such as the Children's Writer in Residence may go unrecognised, as the scheme rolls over from year to year. We are grateful that her tireless efforts are being recognised by the wider community of those advocating for the important place of children's literature.”

Ms Brooking says she was surprised and excited to receive the award.

"...to receive an award named after this remarkable individual reflects not only recognition for my services to children’s literature but also the important role it has within this University."

Ms Brooking completed an MA in children’s literature at Melbourne’s Deakin University in 2003. She has published a wide range of academic papers in New Zealand, Italy, Germany, Portugal and Australia. She has also had a long-standing active involvement with the New Zealand Reading Association.

The Storylines Betty Gilderdale Award was presented to Ms Brooking by Dr Limbrick at the Dunedin Public Library on Friday.

The Bulletin Board asked Trish Brooking more about the residency, her research and what makes her so passionate about children’s literature:

How important is this Residency in New Zealand?
The writers and artists acknowledge the importance of the residency in New Zealand as it is the only designated children’s writers’ residency operating. They often comment on how the residency acknowledges them as New Zealand writers/artists which helps them grow in confidence. We are fortunate to have the support of Creative New Zealand and we have a partnership with the Robert Lord Cottage Trust that provides free accommodation for our writer in residence. This is a significant drawcard. The Residency sits alongside the other established University of Otago Fellowships such as the Burns, Mozart, Frances Hodgkins and Caroline Plummer and all of the Fellows are formally welcomed together at the Hocken each year. Having a Residency that targets youth signals how this University values and recognises the talent of New Zealand writers and artists who produce work for young people.

Former Fellows have received lots of success lately – what impact do you think this Residency has made to their careers?
They all comment on the wonderful opportunities the residency offers. Time is the critical element and they relish the chance to devote themselves to the project at hand. They also enjoy meeting students, schoolchildren, and travelling to the University of Otago’s Southland Campus as this is a chance to (re)connect with their audience. The residency has helped them all as it has boosted their careers by providing an opportunity for them to undertake and complete major pieces of work. They have also enjoyed the opportunity to interact with the other University of Otago Fellows and last year Melinda Szymanik and Jeremy Mayall (Mozart Fellow) collaborated with the presentation of an original score to accompany the publication of Szymanik’s picture book The Song of Kauri.

What makes you so passionate about children’s literature?
Well I love reading widely as my book club mates would attest! I have also had some wonderful mentors as I began my career specialising in children’s literature – people like Anna Marsich, John Smith, Jane Johnson and Mary Anne Baxter. I think that children’s literature offers such variety and depth and as critic Nicholas Tucker has noted nothing tells us more about a society than the literature produced for its children. I hope my enthusiasm for children’s literature has a spin-off effect in the classroom via my students, as literature is such a conduit for developing dispositions for learning like using language, symbol and text, thinking, relating to others, and in developing critical literacy. It can be used across the curriculum in subject areas such as social sciences, drama, art, health, science and maths.

Last words?
I believe that exposure to children’s literature enhances development in imagination, linguistic knowledge, humour, empathy, and critical inquiry. Above all it’s the power of story, irrespective of the medium, that assists readers in developing their navigational skills for participating in an increasingly complex world. I think the residency has such an established reputation due to the commitment of many people. Creative New Zealand and the University of Otago facilitate the continuation of the residency and in so doing, make a major contribution to New Zealand children’s literature outputs and the intellectual and creative life of the University community.