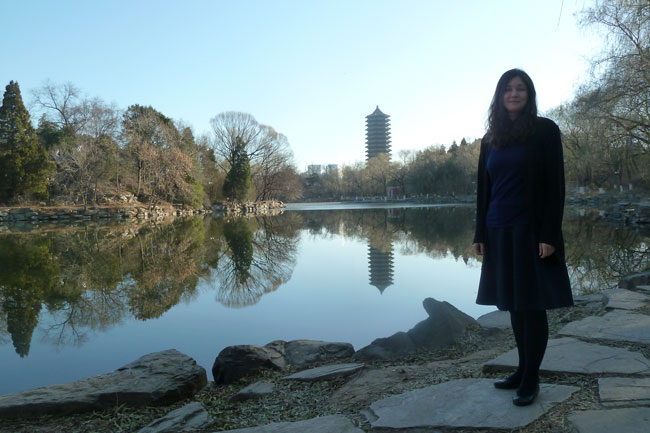 Otago's Dr Anne Ford in front of Weiming Lake, Peking University. The New Zealand Centre is located at the edge of this iconic lake, in the Chen Shouren garden.

Dr Anne Ford, her “very supportive” partner Errol and 20 month old daughter Mica are in the midst of an inspirational three months living in Beijing, China, where Dr Ford is working out of Peking University’s (PKU) New Zealand Centre.

The Centre is managed by all eight of New Zealand’s universities in collaboration with several New Zealand government agencies. Many Otago researchers have spent time there; this year Mathematics and Statistics’ Dr Austina Clark and Politics’ Dr Nicholas Khoo have been Visiting Fellows, and a further four Otago academics will follow suit in 2016.

Dr Ford says, “The Centre runs a semester long course at PKU. This year I applied and was selected with a course providing an overview of New Zealand history and culture. I’d worked in China before doing archaeological research (and teaching at a kindergarten) so I was really keen to come back.”

“My main aim is to introduce the students to New Zealand’s history, but also to who New Zealanders are today and what their place in the world is, particularly in relation to the Asia-Pacific region.”

"My main aim is to introduce the students to New Zealand’s history, but also to who New Zealanders are today and what their place in the world is, particularly in relation to the Asia-Pacific region."

Living and working in a city of some 22 million people presents few problems for Dr Ford and her young family, especially with Errol providing “daddy day care”.

“Mica is of the age where she is absorbing new words all the time – and it’s amazing how many of her new ones are Mandarin! We have an apartment near the Olympic Park area, so there are lots of museums and parks for her. She really enjoys Chinese food and is even trialling chopsticks.

“The hardest thing about Beijing is the pollution – but we monitor it closely. Mica is very good at wearing a mask outside if it is too bad, and we’ve found plenty of indoor things to do.”

Dr Ford says the PKU campus itself is beautiful, being situated in an area that was originally the royal gardens during the Qing dynasty.

“We’re literally walking in the footsteps of royalty.”

Professor Nicholson says, “Through the Centre, Otago is helping run the course on New Zealand heritage and culture that Anne is teaching now. It’s an opportunity for us to showcase New Zealand in one of China’s most prestigious universities and increase our collaborative relationships there."

“Anne is a lovely, bubbly, energetic person. It comes through in the way she teaches. Stereotypically, Chinese students sit and listen, but Anne has got them interacting with her and each other, introducing a different pedagogy.”

"Stereotypically, Chinese students sit and listen, but Anne has got them interacting with her and each other, introducing a different pedagogy."

For Dr Ford, her Beijing experience rounds off “a tremendous year”. It started with being appointed a full-time Archaeology lecturer on 1 Dec 2014, then she became an Otago Research Grant (UORG) co-recipient, and following that came a $300,000 Marsden Fast Start grant.

“I am a specialist in lithic analysis or stone tools, which have been used from 3.3 million years ago up until the 20th century. In essence, I’m interested in exploring how stone tools can be used to decipher behavioural patterns in the past.

“Now, with my Marsden grant, I’m incorporating both pottery and stone tools to investigate the relationship between Papua New Guinea inhabitants, who’d been living on the mainland for at least the last 45,000 years, and Lapita colonists who first appeared there about 3300 years ago, probably coming from South East Asia. The Lapita went on to head east into the Pacific, where they eventually became the ancestors of the Polynesians, and subsequently Māori.

“I found out about the Marsden grant here in Beijing. It was a wonderful surprise!”