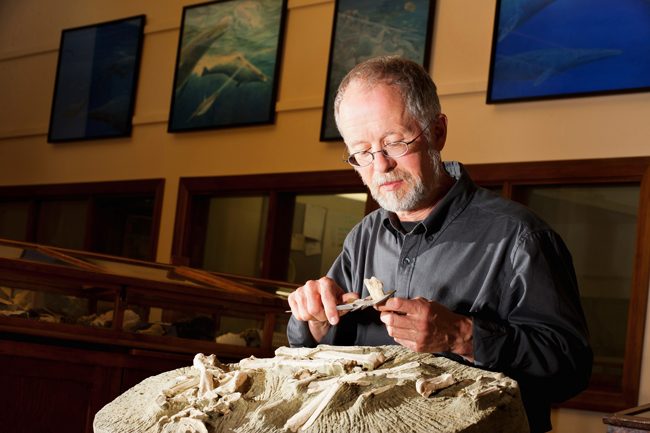 Geology's Professor Ewan Fordyce is the new Senior Editor of the Journal of the Royal Society of New Zealand.

Otago’s Professor Ewan Fordyce says being appointed Senior Editor of the Journal of the Royal Society of New Zealand provides him with the opportunity to make a wider contribution to New Zealand science.

He brings a wealth of editorial experience to the Journal, having been an associate editor for several years on the Journal as well as on Journal of Vertebrate Paleontology. He also edited Maui Ora (later renamed New Zealand Natural Sciences) for a time.

"...I look forward to flying its flag and perhaps waving it a bit more vigorously."

“I’m pleased to have the opportunity to contribute to research – especially New Zealand-based – in this way,” Professor Fordyce says. “The Journal of the Royal Society of New Zealand started as the Transactions of the New Zealand Institute in 1869. It has a long history and accordingly a bit of nice patina. It spawned a cluster of other journals earlier in the 1900s (geology and geophysics, agriculture etc), all now handled by Royal Society of New Zealand. JRSNZ still has a place in spite of the specialty journals, and I look forward to flying its flag and perhaps waving it a bit more vigorously.”

Professor Fordyce teaches paleontology and stratigraphy, especially related to basin studies and evolution of the New Zealand biota. His research involves the evolution of whales, dolphins, penguins, and other marine vertebrates.

He says the Journal’s traditional content, the natural sciences, is a familiar background for him.

“However, I do feel there is value in encouraging articles that might broaden its scope.”