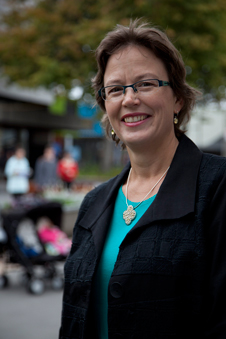 A Christchurch rheumatologist awarded one of Arthritis New Zealand’s highest honours says her success would not be possible without the dedication of research participants, and clinical and research colleagues.

The award recognised Professor Stamp as a New Zealand-based academic whose research has made an impact worldwide. She is a key gout researcher both in New Zealand and internationally, and her investigations into rheumatoid arthritis have helped to improve the lives of patients living with the condition. Her work has influenced international guidelines and is cited in some of the most respected medical journals, as well as on Wikipedia.

Professor Stamp says she is grateful to Arthritis New Zealand for the recognition.

"It’s a real honour to get the award, which I feel recognises the huge amount of work put in by so many people, not just myself."

“It’s a real honour to get the award, which I feel recognises the huge amount of work put in by so many people, not just myself. A group that deserves much praise are our dedicated research participants who take part in our clinical trials. Success is also due to the hard work of my clinical colleagues and research colleagues, and also collaborators.”

Professor Stamp is currently the lead researcher on four Health Research Council (HRC) contracts, including a project on the safety and efficacy of high dose allopurinol in the management of gout and a feasibility study on the effects of tart cherry concentrate on gout flares and serum urate. She is also a named researcher on several other HRC contracts, including a $5 million programme led by Associate Professor Tony Merriman, investigating urate and gout genetic control, environmental and drug interactions.