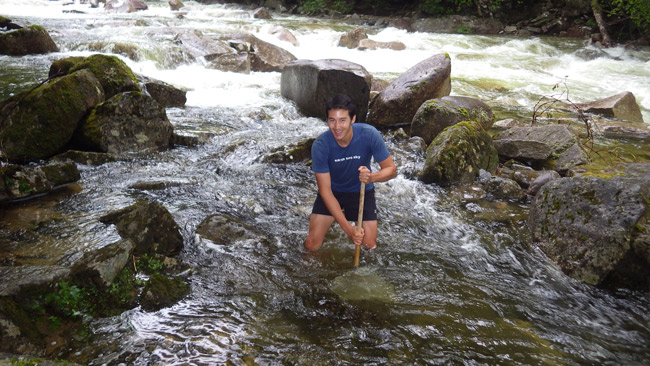 Limnology is the study of inland waters. The award will support Dr Piggott to travel to Torino, Italy, in August and deliver a plenary lecture at the society’s 2016 Congress.

His award-winning paper, which was selected by nine international judges from entries from 19 countries, appeared in the journal Global Change Biology. The paper had earlier won “best paper” awards from the University of Otago and New Zealand Freshwater Sciences Society.

The paper focused on the complex interplay of environmental stressors — including climate warming and effects from agricultural land use — on the composition of periphyton, which are communities of algae and other tiny organisms that live in stream and river beds.

Made from circular ring molds, these enclosures — known as mesocosms — were filled with gravel and cobbles to mimic the riverbed and were colonised by stream life. The individual and combined effects of the different stressors on the algal and bacterial communities were then studied by Dr Piggott and colleagues.

Dr Piggott says the experiment was the first to evaluate responses of stream communities to multiple agricultural stressors coupled with simulated climate warming.

“Knowing how predicted warmer water temperatures may interact with farm runoff and erosion is essential for effective freshwater management and policy.”

Dr Piggott’s pioneering research has attracted much attention in the international limnology community and he is currently on a European lecture tour.

Dr Piggott says he was “delighted to receive international recognition of his research”. Ultimately, he hopes his research will improve the management and conservation of freshwater biodiversity and ecosystem services in the face of global change.