A role that is going to be hard to leave behind 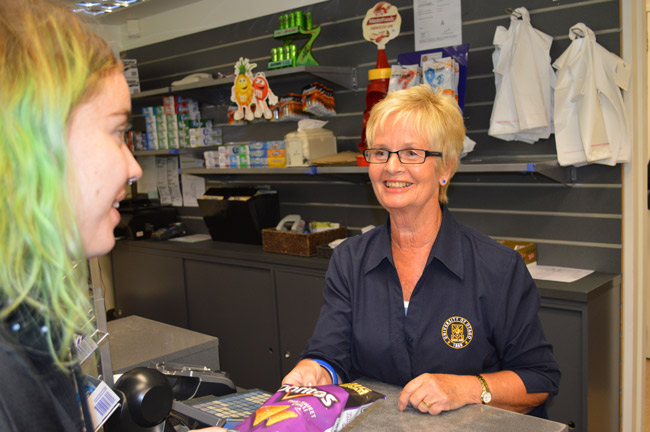 Sandra Gillam knew she would get a job in the Campus Shop because a psychic told her so - but she says with a laugh 31 years later, the psychic never told her when to leave.

That has been a difficult decision to make because she has never woken in the morning feeling reluctant to go to work, even though she now sees some of the students she served coming back as parents of students.

Sandra feels touched those parents still recognise her, and at the very mention this story might go out to alumni as well as staff and postgraduates, her eyes well up with emotion, surprise and embarrassment at the thought her work could deserve the recognition.

It does not seem to have occurred to Sandra that the reason they are lovely is because she is so lovely to them.

With her welcoming smile radiating joy at being behind the counter and getting to meet so many people, the 69-year-old is always ready for a gentle joke and laugh with all the wonderful colleagues, students and staff.

Sandra applied to work at the University when a friend let her know an opening was coming up on the campus. Until then she had been working as a teacher’s aide, cleaning the Telephone Exchange and in cafes.

A few months before the job came up, a clairvoyant had told Sandra she would work at the University but Sandra did not believe her: “I said can you really see that? I didn’t finish high school, I left when I was 15.”

Those early days on campus from February 1985 were in the Student Union building, in a spot now occupied by toilets. She was on $4.85 an hour and working part-time while bringing up a family with husband Allen.

Then, the shop moved into The Link and so did Sandra, who thinks if she had been in retail in the city centre she would not have kept working so long.

It has been different in the University’s own “wee world”. She has had such a good time with her great team and customers that “there’s so many good memories, too many great memories to choose one in particular.”

Sometimes she could tell if students were stressed, but only because they were in such a rush, or were buying more energy drinks and chocolate.

She has seen some of them go on to appear on television, including All Blacks Mike Brewer, Anton Oliver and Marc Ellis, and opera singer Jonathan Lemalu.

Seven years ago Sandra cut back from full-time work to four days a week, then she began to feel tired recently so decided to retire, and is finishing this week.

Her husband is also retiring at the end of the month after 50 years with the Ministry of Fisheries, during its various guises.

A son has shouted them a holiday after they retire, in Port Douglas, Australia, with his family. He has also told them to book a one-way ticket to his home in Sydney because they can stay as long as they like.

But Sandra also has plans to join a gardening group, a walking group, and spend more time with her Dunedin and out-of-town grandchildren.

She plans to do some volunteer work for charity as well, probably in retail – “I think you could have fun there as well.”