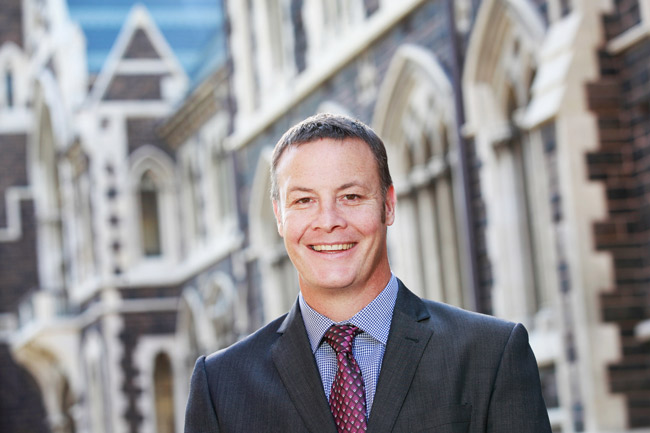 After just a few weeks in the job, the Bulletin jumped the queue to talk to new University Proctor Dave Scott, whose shift to the role from the New Zealand Police is a direct result of a genuine desire to improve the safety of student-run events.

After 20 years policing in Dunedin — and working to reduce student harm for much of that time — the former Senior Sergeant has brought with him some well-honed negotiating skills; he knows how intelligent students are, and that they will listen to a persuasive but logical argument.

His responsibilities with the Police since 2012 included managing activities around the Hyde Street party and other student events: “After a lot of ill-feeling over the 2012 Hyde St event, I wanted to try something different, so we set up a meeting between emergency services, landlords, students, surrounding businesses owners, as well as OUSA and University staff. We got everyone around the table for the first time, and allowed them to have their say.

"well, that’s one hip operation for your granddad he can’t have because you’ve used up that money."

“We convinced landlords and students that if they wanted this to continue, they needed to take ownership of the event, and we set about a collaborative approach where OUSA helped the Hyde Street residents to run the event to keep it safe. It could still happen, but in a much more controlled way."

He told the landlords and students about the huge amount the 2012 event had cost the Police, other emergency services and health services — in the tens of thousands of dollars — and asked a question that got Hyde Street students thinking: Did they have grandparents?

“They didn’t know where I was going with that, and then I said, ‘well, that’s one hip operation for your granddad he can’t have because you’ve used up that money, and maybe that’s one elderly person’s much needed ambulance after her heart problem that can’t be there because it’s tied up at Hyde Street.’ Then you see them begin to understand,” he says.

Since then, changes to the Hyde Street event have sparked fewer incidents and less harm — it became glass-free which is reducing injuries and surgery costs; people now need tickets to get in so the number of party-goers is controlled; people can no longer sit on flat roofs; food is supplied, and an army of volunteers help keep the event safe.

"It’s not perfect, but it is a much more safely-run event now."

“It’s not perfect, but it is a much more safely-run event now; injuries have reduced, and alcohol-related harm is markedly down. Each year now, we get around the table again to work on continuous improvement of the event,” he says.

Mr Scott’s goal now that he is Proctor is to further positively influence students through Campus Watch, and “hopefully we can help make them better New Zealanders.”

He is also turning his experienced focus on the sometimes dangerous pop-up parties that are not well organised, where events can still get out of hand.

The Castle Street balcony collapse, which he attended with the Police earlier this year, was a particularly frustrating experience and a low-point he would not want to see happen again, despite the fact the Police did their best on the night.

They had very little notice of the 660 band party, and did everything they could to get people off balconies and roofs.

As part of his work as Proctor, Mr Scott will lead efforts in the University to develop new evidence-based initiatives to enhance student behaviour and safety. He will also supervise the five Campus Watch Team Leaders and their 35 members, and be responsible for Emergency Management at the University.

Mr Scott says the University of Otago is a world-class institution and Campus Watch is an innovative team offering outstanding pastoral care to students 24/7, and he is excited about taking on a role that he expects to be both challenging and rewarding.