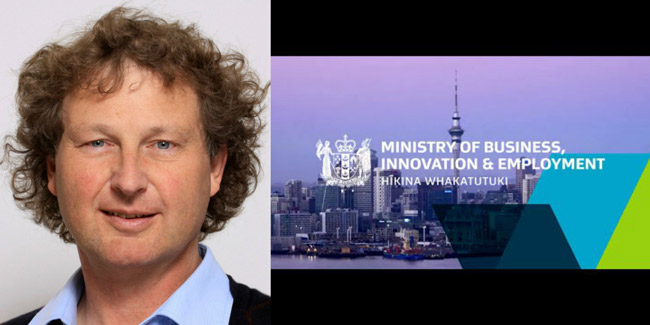 Professor Hamish Spencer and the ministry he is advising.

A leading University of Otago Zoology researcher, Professor Hamish Spencer, has been appointed by the Ministry of Business, Innovation and Employment as one of two Departmental Science Advisors.

Paul Stocks, Deputy Chief Executive of the ministry’s Labour, Science and Enterprise group, says he is very pleased to announce that Professor Spencer and Dr Rob Murdoch have been appointed.

“These two appointments will bring science sector expertise, and new thinking and networks, into the science branch and wider MBIE (Ministry of Business, Innovation and Employment), and support me with specialist advice and thought-leadership across the science portfolio.”

“They will provide scientific leadership and sector expertise across MBIE in areas requiring scientific depth as well as giving us advice in our policy development, and the selection and management of our significant investments.”

"Professor Hamish Spencer is an internationally respected scientist, with a breadth of practical experience playing key roles within the New Zealand science system that will provide invaluable insight and guidance at a crucial time."

Professor Spencer — who also has honorary academic appointments at the University of Auckland and Massey University — specialises in evolutionary genetics and its applications.

Most recently he has focussed on incorporating epigenetics — the phenomenon of external modifcations to DNA that turn genes 'on' and'off' rather than changing the DNA sequence — into evolutionary theory. His research is highly cited and regarded as world leading.

He was the Director of the Allan Wilson Centre and a principal investigator in the Gravida Centre of Research Excellence. Some of his work is now part of the Biological Heritage National Science Challenge. Professor Spencer is an experienced communicator with the public and iwi, and appeared on the recent Gene Genie programme produced by Radio NZ.

Dr Murdoch is General Manager Research at the National Institute of Water and Atmospheric Research (NIWA), and has overseen the planning and direction of NIWA’s science, along with the management and operation of NIWA’s research vessels, (including the RV Tangaroa), since 1999. Dr Murdoch has a PhD from the University of Otago.

Sir Peter Gluckman, the Prime Minister’s Chief Science advisor, has welcomed the two MBIE appointments: “Professor Hamish Spencer is an internationally respected scientist, with a breadth of practical experience playing key roles within the New Zealand science system that will provide invaluable insight and guidance at a crucial time for MBIE as it seeks to balance the types of demands that science systems worldwide are now facing.”

“Dr Rob Murdoch has sector science experience that will provide critical assistance to MBIE in working across the NZ science system to provide leadership and promote collaboration in research and practical science initiatives.”

“I look forward to working with both Hamish and Rob, alongside the network of DSAs (Departmental Science Advisors), to co-develop the tools and channels for better use of evidence in policy making more generally.”