An award, a waka, an app and displays for Māori Language Week

Showband history, a waka at the library, and an award at the St David Café all featured in Maori Language Week on the Dunedin campus this week.

Echoes of Ngoi Pēwhairangi’s Whakarongo could be heard throughout the halls surrounding St David Café this week as its staff were presented with the inaugural He Toki Reo Award.

The waiata — a song about language revitalisation and retention — was a fitting choice for the presentation of an award recognising the café’s ongoing efforts to promote te reo Māori on campus, especially with its recently installed bilingual menu signs.

"signage is hugely meaningful not only to the University but also to our community."

In presenting the certificate to café manager Jo Bain, Office of Māori Development Director Tuari Potiki said that “while it may seem quite small, the [café’s] new [bilingual] signage is hugely meaningful not only to the University but also to our community”.

Ms Bain promised the gathering “this was just the beginning” and that she and her staff would continue to do all they could to help make Māori a living language on campus.

The award is the latest in an ongoing series of initiatives stemming from the University’s Māori language strategy He Toki Reo, which was launched earlier this year.

The wording on the award certificate echoes the ethos behind the strategy: "He Toki Reo-nōku te korikori. Ko te whakamahi i te reo i Te Whare Wānanga o Ōtākou”, which in spirit means “follow me and succeed”, “there is strength in unity” and "using the language at Otago University". 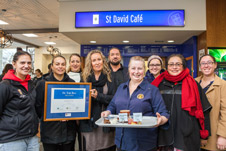 Ms Bain was also presented with a He Toki Reo wristband at Wednesday’s award ceremony as recognition of her own use and support of te reo Māori.

She was given extra bands as well, to hand out at her discretion and as incentives for her staff’s individual attempts to improve their level of te reo Māori.

The wristbands are another example of the Māori language strategy in action.

They are intended to be worn as a signal to others that the wearers are willing and able to communicate in Māori, in line with this year’s Māori language week theme of ‘give te reo Māori a go — ākina te reo’.

That was reinforced when KMK distributed its pocket-sized, bilingual cards at the cafe that morning for ordering coffee and tea.

Te Tumu Māori Studies Programme Co-ordinator Tangiwai Rewi says since the wristband initiative was launched in March, the number of bands given out has gone in waves.

“Currently we are experiencing a peak with Māori Language Week. We continue to hand them out sparingly, but willingly, to those supportive of the Kaupapa.”

A double hulled waka installed on the ground floor at the Central Library as part of Māori Language Week may stay there for longer. 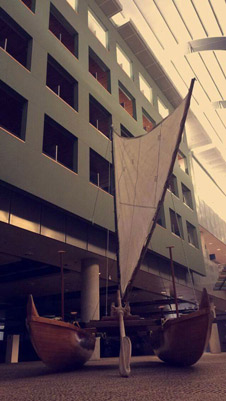 While the rest of the country officially marked Te Wiki o Te Reo Māori last week, celebrations at the University were delayed by a week to coincide with students’ return for the second semester.

Those celebrations started with the double hulled waka being installed at the Central Library on Monday morning.

The idea of bringing Hauteruruku into the library was developed several months ago by Māori Resources Portfolio Librarian Jeanette Wikaira and Dr Anne Marie Jackson (School of Physical Education, Sport and Exercise Science).

“The Waka Hourua (double hulled canoe) Hauteruruku is a perfect example of a living taonga from Te Ao Māori (a living treasure from the Māori World) being a symbol of relationships and community and a vehicle for a range of other kaupapa (principles or purposes), such as the promotion of Te Reo Māori,” says Ms Wikaira.

“A group of Māori students, who are part of the crew of Hauteruruku, have been studying near the waka all week and have been fielding any questions and provided impromptu talks about Hauteruruku.”

Ms Wikaira says the response from staff and students has been “overwhelmingly positive”.

The waka will remain in the Central Library until at least today, but may stay for another week becauae it has sparked so much interest.

At Monday’s opening, Dr Jackson and Suzi Flack (Kāi Tahu, and Hauteruruku crew member) both spoke of the strong community involvement of Hauteruruku ki Puketeraki, retelling the important foundational story of the waka and the strength of collaboration between whānau, community and outside organisations, such as the University.

Installation of the waka was made possible thanks to the support of the whānau of Hauteruruku, including Brendan Flack, Suzi Flack, Hinerangi Ferrall-Heath, Khyla Russell, Ngahuia Mita and Anne-Marie Jackson.
Library displays

In honour of Te Wiki o Te Reo Māori (Māori Language Week), several of the University’s libraries have displays showcasing Māori research, which will remain in place for several weeks:

“Turning up the Māori” – with an app

A new app called The Showband Mix-O-Matic was launched during Māori Language Week by Lou Kewene Doig, a Professional Practice Fellow and Technician in the Music programme.

The free iPad app — she co-developed with Grant Baxter from AppLab as part of her Master’s research — is an imaginative way of introducing users to Māori music history in a fun and exciting way, she says. 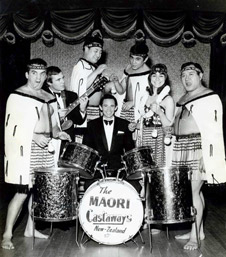 The showband The Māori Castaways.

With an interface reminiscent of a 1960s recording studio, the app lets users take short musical loops and remix them any way they wish within the app.

What makes the app so special is that the musical loops are edited from a re-recorded version of the 1963 song “Poi Poi Twist” By Rim .D Paul and the Quin Tikis. An arrangement of the song “Poi Poi” recorded by the Māori Hi Five and written by Jay Epae.

Ms Kewene Doig’s father Hekemaru Kewene was part of 1960’s Māori showband musical history; as a member of The Māori Castaways, he toured the world before passing away when Ms Kewene Doig was young. She say researching Māori showband history was a way of connecting with that rich musical legacy.

“I wanted to create a connection between Māori music history on one hand and bring a meaningful experience to the digital user. If kids are going to spend so much time on digital devices, why not give them entertainment learning – what I call ‘turning up the Māori’.”

"I wanted to create a connection between Māori music history on one hand and bring a meaningful experience to the digital user."

Last weekend’s official launch attracted more than 1000 people, who attended one of the live performances of It’s a Māori Melody at Allen Hall or watched the streamed performance online.

It’s a Māori Melody is a verbatim theatre music performance event; an afternoon reminiscing with the sounds of Māori showband music and Māori experiences of Dunedin in the 1960s, devised by Ms Francis Kewene her sister.