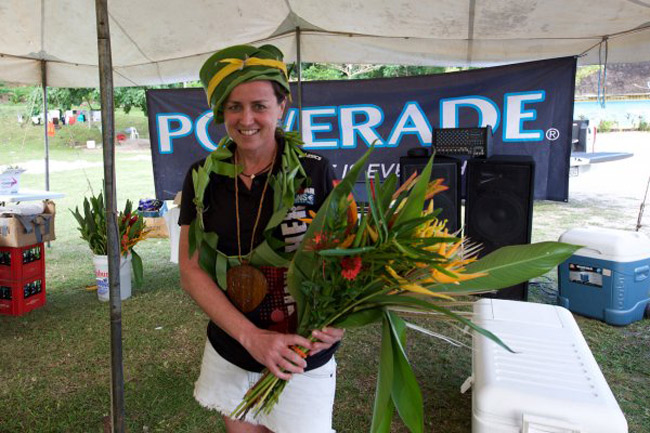 Otago Professor Alison Heather after being declared the winner of the women's section of the half-ironman Warrior Race in Samoa late on Saturday afternoon. Photo: Scottie T Photography.

The Samoa Observer says professors do not often compete in multi-sport events in Samoa and Otago’s Alison Heather even ended up winning the women’s section of the Warrior Race.

Reporter Seti Afoa says she was originally the second female to cross the line in the half-ironman swim, bike, run, but won after a race review.

When Professor Heather registered earlier this year, her goal was just to finish, but she was declared the winner of the women’s section late on Saturday afternoon after a review of the race.

The reporter said the win "is more success for an already high achiever” because she is a lecturer and Research Professor at the Department of Physiology at the University of Otago.

She and partner Professor Allan Herbison — the Director of Otago’s Centre for Neuroendocrinology — travelled to Samoa for the first time so she could compete in the event, which also attracted entrants from the United States, Japan, Australia and Samoa.

Professor Heather says she was the first woman out of the water in the swim and cycle, but while Taranaki’s Lauren Hann was the stronger runner and the first female to cross the finish line, Hann did not do the hill sections on the bike.

Heather finished sixth in a field of 11, with two male athletes trailing her and another two competitors failing to make it to the finish.

Her field of study investigates how atherosclerosis is influenced by the sex hormones androgens and estrogens.

Her major focus is trying to understand why younger men suffer earlier onset and more severe disease than younger women, but she is also heavily involved in developing tests to detect designer androgens used in sports doping.

The other focus of Professor Heather’s research is trying to understand why estrogen-based hormone replacement therapy can have adverse cardiovascular effects in some women.