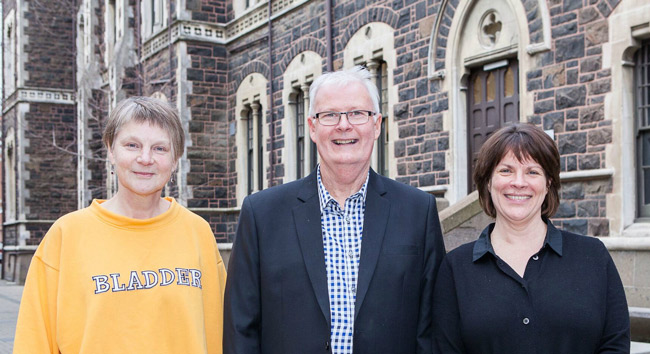 "He enrolled in the papers he was assisting with, not only so that he understood the objectives and content of the courses, but also to see how they ran from a student's perspective."

He supervises a full-time technician and a part-time laboratory assistant, coordinates the use of all lab space (including commercial consultancy work and training), and is responsible for budget planning, equipment purchasing, equipment maintenance, applications for building alterations and liaising with Property Services about the Science I lab. He is also the Departmental Health and Safety Officer.

They say that early on, “he enrolled in the papers he was assisting with, not only so that he understood the objectives and content of the courses, but also to see how they ran from a student's perspective.”

He is involved in teaching some classes, showing students how the equipment works, and also to understand what they are doing and why.

“This teaching role leads Kieran to be able to offer helpful insights into the delivery of practical classes and he has, on many occasions, prompted teaching staff to introduce new methods or content.”

He knows every students’ name and is particularly sensitive to the needs of international students with English as a second language, going out of his way to help if they are struggling, while also making sure the course coordinator knows they need extra support.

Mr Columb is renowned for his meticulous forward-planning, preparation, orderliness and attention to detail. Equipment is kept in excellent condition, and he unhesitatingly helps staff acquire and set up equipment needed outside the regular classes he organises.

“The degree of thoroughness that Kieran applies to every facet of his job makes his job performance above and beyond ‘doing a good job’. Yet this level of performance is the norm for Kieran - sustained, exceptional performance.” 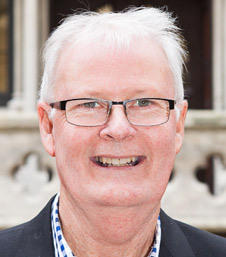 When Nutrition labs had to relocate last year from Science 1 — while it was being redeveloped — to a new Portalab about half the size, “the resultant shift went so smoothly that many staff were unaware it had taken place until it was over.”

“This year's students work in a perfectly set up laboratory and would have no idea that the facility is being used for the first time this year.

Mr Columb also performs the “challenging but vital” task of ensuring the Department fulfils the legal and ethical obligations that surround research records, and organises transport, food and equipment for students going to marae to learn about how the Treaty of Waitangi and tikanga Maori apply to food and nutrition.

As Health and Safety Officer, he makes sure projects meet health and safety requirements, and all students are familiar with the protocols.

Those responsibilities also include being a fire warden, first aider and a member of the spill kit team. He is responsible for hazardous waste, disposal of dangerous chemicals and solvents, and regular audits of the laboratories, and also organised the Human Nutrition walking group for the business house fun runs for many years.

Mr Columb’s nominators say he is an invaluable member of staff and his nomination has the unanimous support of every member of the Department of Human Nutrition.

“He is highly respected by all of his colleagues, not just because he is so good at what he does, but also because of who he is.”

Anatomy Teaching Laboratory Manager Fieke Neuman has worked at the University for 21 years, starting out as a technician in Medicine, followed by technical roles in Anatomy; as a research technician, the Anatomy Museum Curator and one of the Department’s Technical Managers.

Then she took a break from the University before returning as an Anatomy laboratory class developer, followed by her current role as the Department’s Teaching Laboratory Manager. 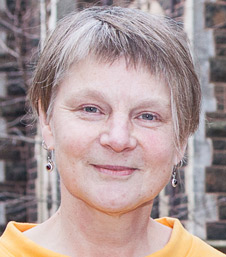 She was nominated for the General Staff Award by Head of Department Professor Neil Gemmell, Associate Professor Christine Jasoni and Ms Sally-Ann Howard.

In Ms Neuman’s most recent teaching-related roles, her nominators say that “her exquisite creativity lies at the heart of her unique ability to develop and produce new textile models for demonstrating complex anatomical processes and structures in a visual and three-dimensional way. Well over 5000 students, notably those in the Health Sciences First Year and Medicine, have praised these resources as highly effective teaching aids.”

Ms Neuman’s unique textile models have contributed substantially to several Anatomy staff winning prestigious teaching awards, and her work has also featured at international conferences. In the spirit of true collegiality, she has started makings her ideas and resources available to all through new web pages.

Ms Neuman’s nominators believe “Fieke is a uniquely talented individual who has a clear eye for identifying where her contribution is needed; and proactively performs her job efficiently, pleasantly, and with outstanding creativity and competence.”

“She is constantly looking for new and better ways of doing things, is always there when we need her, and interfaces seamlessly with academic and general staff across a broad range of disciplines within the Department.” 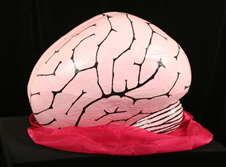 A Fieke Neuman creation ... The burlesque brain with the "inner layer of meninges" unzipped.

For example, she was the driving force behind the creation of the image repository The Virtual Slide Box and has taken many of the photos of specimens herself, to go online with detailed information, so both staff and students have 24-hour access for teaching and research.

“Because Anatomy has such a wide scope, encompassing clinical anatomy, reproduction and development, neuroscience, and biological anthropology, Fieke's job is not only vast but also complex; and she deals competently with a diversity of techniques as well as personalities.”

Alongside her teaching role, Ms Neuman also plays an important role supporting research in the Department, particularly around maintaining core resources, including histology equipment and reagents, that are used by large numbers of research groups, many from outside Anatomy.

“Fieke’s facility and deep involvement with research has also meant that she's brilliant at adapting even the most difficult research methods for use in undergraduate teaching laboratories.”

“She shares her skills liberally, and tirelessly works together with students and staff to ensure solutions are achieved, and that research goals are met.”

"Fieke has a high degree of self-motivation and initiative, which remains unbridled despite more than two decades of service to the University."

She also has specialty roles, including developing and curating specimens for a biobank, and helping with field work, which has involved photographing a burial cave in the Cook Islands.

In her previous role as the Anatomy Museum Curator, Ms Neuman initiated and organised much of the work that has made the Museum the world-class facility that it is today.

Ms Neuman also plays an integral part in the Department’s community engagement initiatives, by organising and leading its activities with the International Science Festival, Hands on Otago (formerly Hands on Science), Otago University Advanced Science Students Academy, and Lab in a Box, “which means her creativity and passion can benefit a wide audience outside the university; and get them enthused and engaged with science too.”

“Fieke has a high degree of self-motivation and initiative, which remains unbridled despite more than two decades of service to the University.”

“Moreover, Fieke appears to possess endless patience, retains a cheerful and pleasant demeanour in the face of adversity, and always works towards the common goal of excellence in research and teaching for everyone in the Department of Anatomy.”

“Without Fieke's excellent support and creative input, an enormous amount of research and teaching spread across the entire department would be severely compromised; indeed, in some cases, may not even exist. Fieke's vital and unparalled support in both teaching and research lifts everyone's game. Her efforts make the Department of Anatomy a vibrant, creative, and positive place,” Ms Neuman’s nominators say.

Since the award was instituted in 2004 by the Vice Chancellor's Advisory Group, winners have been chosen from across campuses and departments. The award winner(s) receive a grant for a project or professional development initiative that benefits the University as well as the individual.