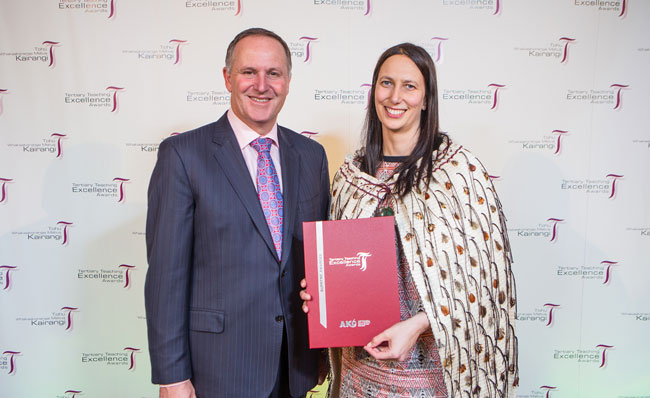 For the fifth year running, the Prime Minister’s Supreme Award for tertiary teaching excellence has gone to a University of Otago academic.

Otago Faculty of Law Professor Jacinta Ruru was presented with the accolade by Rt Hon John Key at a function at Parliament last night. She receives $10,000 through the Supreme Award as well as a further $20,000 as one of 12 tertiary teachers to be recognised through this year’s Sustained Excellence Awards.

Professor Ruru’s award acknowledges her sustained excellence in tertiary teaching to create a place for Māori to stand and be heard within New Zealand’s legal system.

As the first Professor of Law of Māori descent in New Zealand and the only Māori Law Faculty staff member at the University of Otago since 1999, Professor Ruru is designing a new experience for students learning law. Her strategy is to give greater focus to Māori experiences of the law, Māori relationships with land and Māori challenges for change in the classroom.

She recognises that education is key to achieving positive transformational change and works tirelessly to establish a safe place for Māori students to learn and succeed. Her ultimate aim is to increase Māori involvement in law at a higher level.

She also established the Māori Law Moot Competition at Otago and co-designed a new multidisciplinary Māori programme focused on providing solutions to transform Māori learning. She is described by colleagues as “incredibly generous in sharing her teaching experiences and expertise”. A former student comments, “In succeeding at the highest level and carving out a unique niche in her field, she gives others the confidence to do the same.”

Professor Ruru is one of two Sustained Excellence winners in the Kaupapa Māori category. Three of her Otago colleagues are among the winners in the General category: Dr Judith Bateup (Microbiology and Immunology); Professor Darryl Tong (Oral Diagnostics and Surgical Sciences); and Dr Rachel Zajac (Psychology).

“Jacinta is a richly deserving winner of the Supreme Award and I’m sure that staff, students and alumni of the University will join me in applauding her, Judith’s, Darryl’s and Rachel’s remarkable achievements,” Professor Squire says.

As well as last night’s success for Professor Ruru making it the fifth year in a row that Otago academics have won the Prime Minister’s Supreme Award, it also marks the seventh time in the past 14 years that the honour has gone to a teacher from this University.

Professor Squire says that Otago’s sustained leading performance in the Awards reflect its position at the forefront of New Zealand universities in teaching.