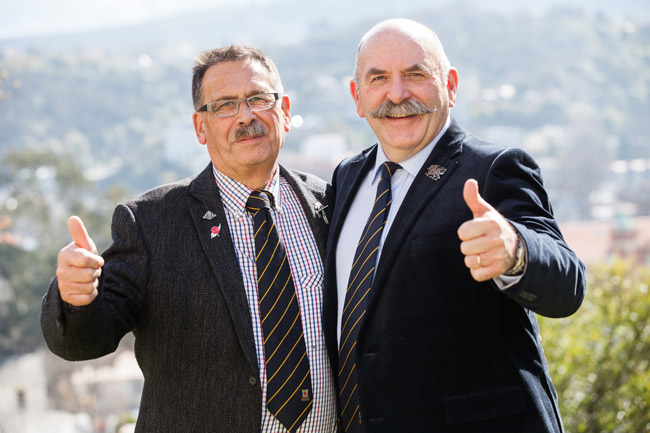 Last month was Blue September, the Prostate Cancer Foundation’s national awareness campaign. This is a time when men of all ages are encouraged to think about their health needs and to get check-ups.

Two men at the University of Otago with personal experiences of the importance of the early detection of prostate cancer are Arana College Warden Jamie Gilbertson, and Professor John Broughton, Associate Dean (Māori), Faculty of Dentistry.

Both are keen for men on campus to pick up on the Blue September check-up message.

John is responsible for the cultural competency and Māori oral health component of the dental undergraduate course, and is the Dentist and Community and Convenor for the Final Year Dental Student Community Service Learning programme.

Jamie is responsible for all aspects of the running and day-to-day management of Arana, its residents, and staff. He also sits on the Vice-Chancellor's Code of Conduct Committee, and the Limitation of Enrolment Committee.

Both John and Jamie are prostate cancer survivors, and both are now strong advocates for the importance of health check-ups – you may have seen their story on TVNZ news recently.

The two have much in common; aside from their contributions to the university and to Māoridom, they have both been in her Majesty’s Service. John and Jamie first met in the field ambulance service 35 years ago, John providing dental services while Jamie was the medic sergeant. 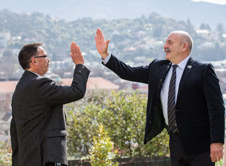 Both are proud to have served, and to be part of what is actually a sizeable University of Otago alumni of health science graduates serving, not only in both world wars, but also in Malaysia and Vietnam, and in peace-keeping roles including in Afghanistan. They say it’s a legacy the University should be proud of.

Jamie’s service included work in the Solomon Islands in the 1980s, where he helped train and deployed medical teams, and was involved in front-line health screening for everyone in the villages he was in.

Jamie’s work in particular was in a challenging environment, often involving an element of danger, whether it was in a helicopter or a boat in shark-infested waters. “It was an adventure, but reflecting on life now, I thought it more likely I would face death through adventure, rather than through an insidious cancer.”

Facing up to new challenges

Neither John nor Jamie had the symptoms that sometimes show up when prostate cancer develops, so both were surprised when PSA (prostate-specific antigen) blood tests during their regular GP check-ups showed irregularities. Both were shocked when, after further tests, their urologist broke the news they had cancer – John in 2013 then Jamie in 2015.

Both elected for surgery, and both had to face up to things they’d never had to deal with before.

“I was walked through what would happen, but went into lock-down,” Jamie recalls. “I had cancer and I didn’t know how to go on. The scary part was if it spread - I had to face up to the risk that I might die.”

“The hardest bit for me was telling people – it was very private and I just couldn’t find the words. It took all the courage I had to tell the Vice-Chancellor initially, and to then tell others. But actually telling them was empowering; once I had fronted up to that it helped me to talk about what I had and deal with it and be brave when actually I was feeling very vulnerable,” Jamie says.

"You are the best person to look after your own health. Wanting to collect the pension and to enjoy your grandchildren puts the time and inconvenience it takes to get a check-up into perspective."

While it was a surreal experience for Jamie, there was a moment where he had to choose his attitude. “I came to terms with the fact that life is risky, things happen and you just have to get on with it, as the army would expect of you.”

But learning how to accept support was also difficult. Both men are in roles where providing support and taking the lead is expected of them. It was very unusual to have people – staff and students as well as family and friends – providing care and offering practical ways to help them.

John, who chose to recuperate from his operation at the Montecillo Veterans Rest Home in Dunedin, recalls being surprised to have his room inundated with flowers from fellow workmates.

“It has left both of us very humbled, and thankful to be working in such a supportive place.”

Both also appreciated the help they received from the local Cancer Society, and from the health professionals who were supportive and kind during a very personal time, even to the point of encouraging and giving practical advice to John to attend an overseas conference only a few weeks after his operation.

The experience has also made them a lot busier – they agree they’re much more aware of each day and have both packed a lot more into their lives, thankful to be in a position to do that.

One of the things they realised on their journey is how important it was to talk to someone – to a bloke.

“Talking about the operation and about how I felt to John, who had been on a similar journey two years before me, was the turning point. You don’t know what you don’t know until you’re in the moment. Our conversation was real but also funny – it gave me the confidence to put personal dignity aside and look forward,” Jamie says. 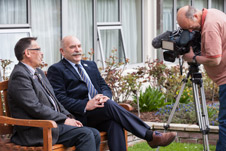 “It’s made both of us realise the importance of conversations about men’s health and wellbeing in general.”

“Life took a different turn for both of us but we’re still here and we’re still working and contributing to our communities and looking after family, because the cancer we had was detected and treated early,” they say.

They agree the key message is that prostate cancer is a men’s problem – you are the best person to look after your own health. Wanting to collect the pension and to enjoy your grandchildren puts the time and inconvenience it takes to get a check-up into perspective.

Jamie says although it was a very personal journey, he’s passed the stage of feeling uncomfortable talking about men’s health and prostates. “I’m now paying it forward; I want to start conversations. People have helped us, we had to learn to take that help, and now we’re standing up, we’re helping out.”

"Prostate cancer is treatable if it is detected early, so have a check-up. If there is one man whose life can be saved by being persuaded to see their doctor it will be worth the efforts of speaking out."

Every year around 600 men die in New Zealand of prostate cancer. The Prostate Cancer Foundation says men often don’t know how dangerous the disease is, they don’t talk to their doctor about it, they simply don’t do anything about it. Their message of last month’s Blue September national awareness campaign was “Face your Fear“ - there are plenty of things to be scared of, a prostate cancer check-up should not be one of them.