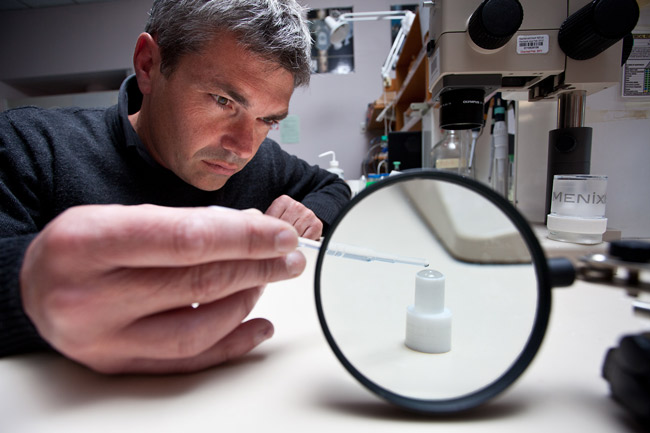 Dr Stephen Sowerby has seen first-hand how a patent born of science innovation can deliver significant global impact, and he’s keen to see how he can extend that for the University of Otago.

Previously Director of the University of Otago’s cross-divisional Applied Science Programme, Dr Sowerby has recently been appointed to the team in Otago Innovation Limited (OIL).

His new role will help to translate complex innovation and position it within a global commercial framework of intellectual property, market demand and investor acumen.

It’s not often that an academic crosses over into a business role here, but it’s a position Dr Sowerby is relishing.

He has already had some experience in science commercialisation, after co-founding nanotechnology business Izon, and being part of the commercialisation process of some innovative science in his previous role with Applied Science Programme.

He was proud of the programme’s involvement in developing some simple yet revolutionary parasite monitoring technology that is now fulfilling a previously unmet animal health need.

“We realised early stage industry partnership in the initiative was crucial, and those links sparked the curiosity of some very valuable connections. UK supermarket giant Sainsbury’s was keen to see how the technology could ensure animal welfare in its farmed products, and the Bill and Melinda Gates Foundation was also interested in what it could do to help the 1.5 billion people afflicted with parasites in developing countries.”

Now commercialised and in the hands of its initial partner the Techion Group, that Otago-born invention is being taken to the world.

Dr Sowerby says when the recent opportunity at OIL emerged, he saw it as a clear change in direction, and was both eager and cautious.

“I had an interesting and rewarding position for seven years and many University colleagues queried my move to the 'dark side.' The reality was, I had a foot already there.

“OIL promised fresh challenges in innovation management and science commercialisation, and I had become increasingly fascinated by codified intellectual property as a repository of scientific creativity and knowledge.

“The patent system provides an alternative expression of research outputs, and I had seen first-hand how a patent born of science innovation can deliver significant global impact.

“My initial views about OIL were shaped from an academic perspective; now on this side of the fence, my view has changed from when I was entirely focused on my own research.

“I didn’t appreciate the enormous diversity of complex scientific discoveries, technical innovations and commercial opportunities presented to this small team by researchers from across the breadth of the University. It is a demanding balancing act.

“I have come to realise that all members of OIL appreciate the great privilege they have to work with academic staff on their research discoveries, particularly as commercialisation is seldom the easy option.

“To understand, translate and position complex innovation a can be a psychological roller coaster for all involved, but meaningful outcomes are anticipated and it is a heck of a lot of fun. Of course, the acid test of success on the dark side will be measured through financial transactions, jobs created and lives changed.”