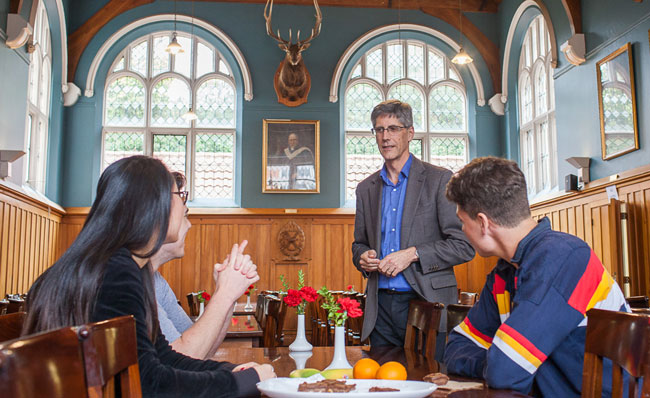 Dr Graham Redding, Master of Knox College, says the Great Hall is his favourite spot at the college because of the central role it plays in life at the college. Photos: Sharron Bennett.

Living in a residential college is an important part of the university experience for many students leaving home for the first time. At Otago, each of our 14 undergraduate residential colleges is supported by a team of individuals whose main priority is to ensure the welfare, enjoyment and overall success of the residents in their care.

At the helm of each college is a leader — known as a Warden at some colleges, Head of College or College Master at others — who is responsible for all aspects of the running and day-to-day management of the college, its residents, and staff.

In this instalment of the College Leaders Series, as featured recently in Otago Connection, we introduce you to The Very Rev Dr Graham Redding, Master of Knox College. 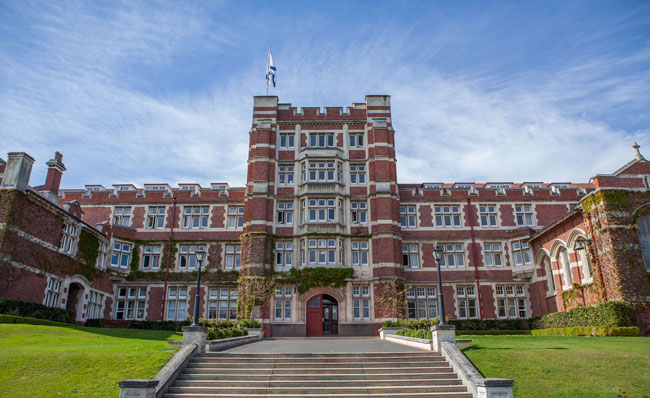 Knox College was established in 1909 to provide residential accommodation for male students and to house an existing seminary for Presbyterian ministers. It became co-educational in 1983. The principal buildings were designed by W. Gray Young when he was just 21 years old.

Q. How long have you been with the college? How did you come to this role?
A. I’ve been Master of Knox College since the beginning of 2015, but my association with the college goes back over 30 years to when I was a student at Otago University. More recently, before taking up the position of Master, I served on the governance board for over nine years, and two of my children have lived in the college. So, I’ve known the college in a variety of capacities over a long period of time. That has given me a deep appreciation of its history and character. 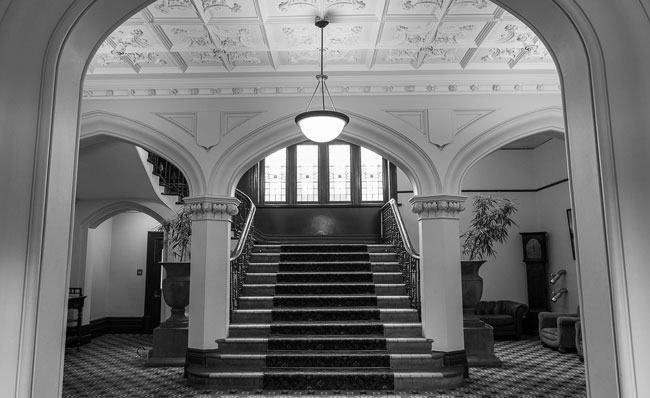 Each year, the first level of the majestic central stairwell in the tower block is transformed into a temporary stage for the Concert on the Stairwell, and the audience is treated to two hours of musical and other performance items.

Q. What’s your favourite college event each year and why?
A. There are so many contenders for favourite event, including the fiercely contested Cameron Shield and Nevill Cup competitions against Selwyn College, and lots of social events, including the unforgettable Harry Potter night and Larnach Castle Ball, but my favourite would have to be the Concert on the Stairwell. Here, the first level of the majestic central stairwell in the tower block is transformed into a temporary stage for an evening, and the audience is treated to two hours of musical and other performance items. The showcase of talent is extraordinary, and as the performers do their stuff, their fellow residents line the stairwell from top to bottom, cheering them on and adding to the special nature of the occasion. Uniquely Knox! 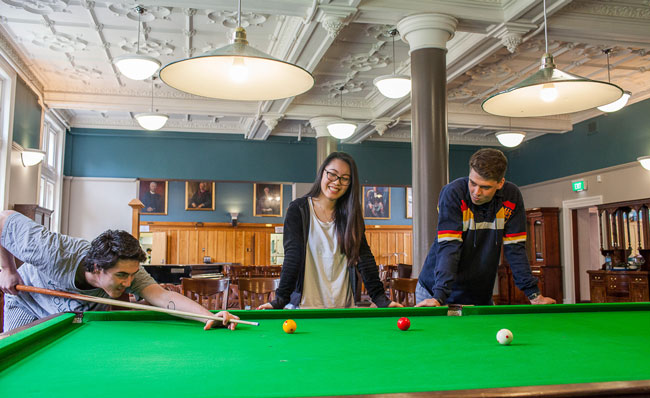 The main social hub of the College consists of the Junior Common Room and Great Hall.

Q. What’s your favourite place/amenity within your college and why?
A. Again, a tough choice given the special character of so many public spaces in the college, including the Ross Chapel, Junior Common Room, Buttery, and Hewitson Library, but my favourite place is the Great Hall, not simply because of its own distinctive character and ambiance, but because of the central role it plays in college life. Respect for meal times is a big thing at Knox, as evidenced by the dinner dress code and table etiquette, and for me the highlight of each week is the formal Sunday dinner, where tables are served and there is entertainment between courses. It’s all about enjoying each other’s company and showing respect for the time that we spend together over a meal. It’s about community. 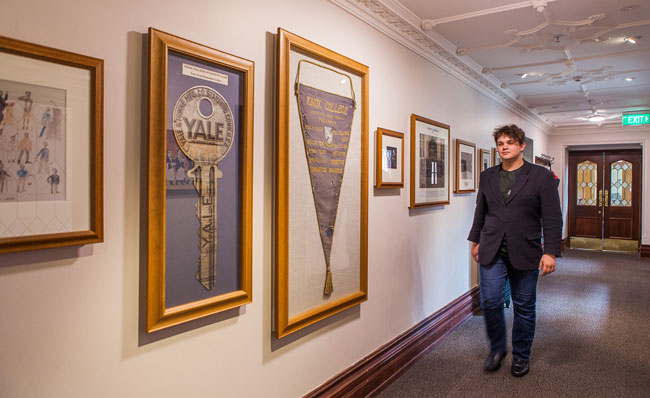 Pennants and memorabilia from past events organised by the Knox College Students' Club line the halls of the college. The club plays a major role in organising college affairs and providing a sense of continuity from one generation of students to the next. It is one of the oldest college organisations of its kind in New Zealand, having drawn up its constitution in 1909.

Q. If your college was a person, how would you describe it?
A. Sir Mark Todd. Seems to have been around forever, all class, and still giving the young bucks a run for their money. A legend. 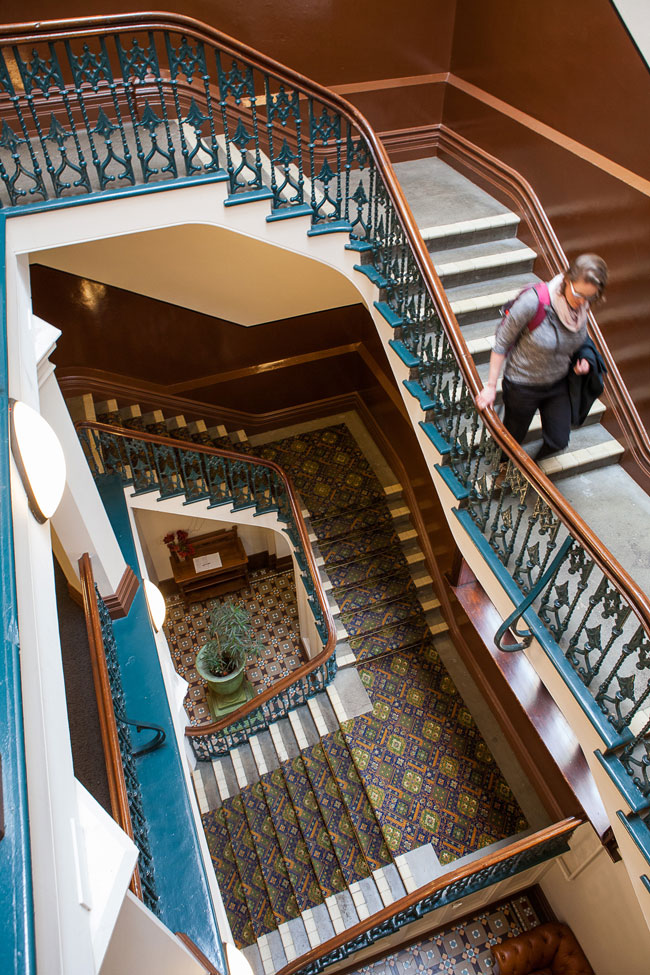 The valuing of tradition is evident in some of the names and titles around the college. For example, the Head of College is known as the Master; the residential assistants are called Sub-Masters; the college has a ceremonial officer called the Beadle; the dining room is known as the Great Hall; and one of the common rooms is called the Buttery.

Q. What would you say makes your college unique? What sets it apart from others at Otago?
A. It’s a combination of things … the close-knit community life, the intensity of the Cameron Shield and Nevill Cup competitions, the spacious grounds and architectural beauty of the buildings, the sense of history and tradition, the opportunities to serve and to give back to the college … all these things combine to form the Knox experience.

Q. Describe a typical day for yourself around the college.
A. There’s the usual mix of administration, correspondence and meetings with staff, but the thing that makes each day memorable is the student contact, both planned and spontaneous. Our residents inspire me, perplex me, and at times frustrate the heck out of me, but they never bore me. They are what makes this job so special, and it’s a privilege to support, guide and encourage them during such a formative period of their lives. 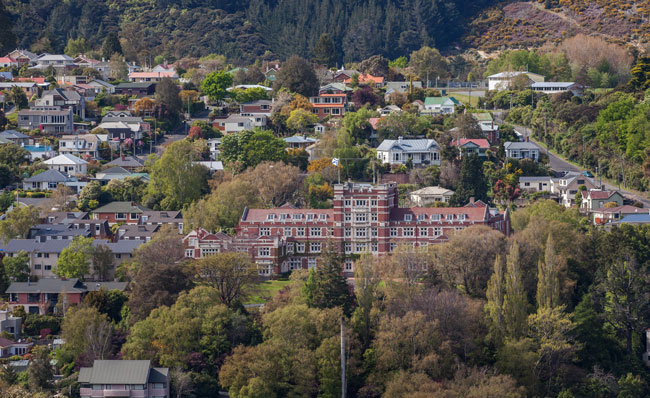 The College is situated on a tranquil bush-clad hillside site just 15 minutes' walk through Dunedin's Botanic Gardens to the University campus.

Q. Is there a particularly memorable story/highlight from your time at the college that you can share with parents/whanau?
A. Each year, after the Knox versus Selwyn swimming competition, one college hosts the other for supper. This year, Knox was the host. Before we moved through to the Junior Common Room for supper, each college performed its waiata and haka out the front of the college at the foot of the tower. As always, it was a dramatic spectacle. Flying high above it all was the Knox flag at the top of the tower. Interestingly, the flag has an image of a dove, carrying an olive branch in its beak, superimposed on a blue St Andrew’s cross. The dove is an ancient symbol of peace and reconciliation. It seems an odd choice of symbol given the intensity of the Knox-Selwyn rivalry and the confrontational tone of the college hakas. But it suggests, in a rather telling way, that for all the rivalry and competition that defines so much of the Knox-Selwyn relationship, there is something greater that brings us together and which we share in common. For me, this was exemplified later in the year when the female residents of Knox and Selwyn came together for a fundraising brunch, with the proceeds going to the Breast Cancer Society. It was a wonderful affirmation of a healthy collegiate relationship, and a display of unity for a good cause.

Q. What do you hope the students will get out of their time at your college?
A. Achieving their academic goals is number one – it has to be; that’s what they’re here for – but, equally, it’s about benefiting from, and contributing to, that thing we call the Knox experience. It would be easy to resort to clichés at this point, but it really is about being more prepared for, and more confident about, taking one’s place in the world and playing one’s part in making it a better place. 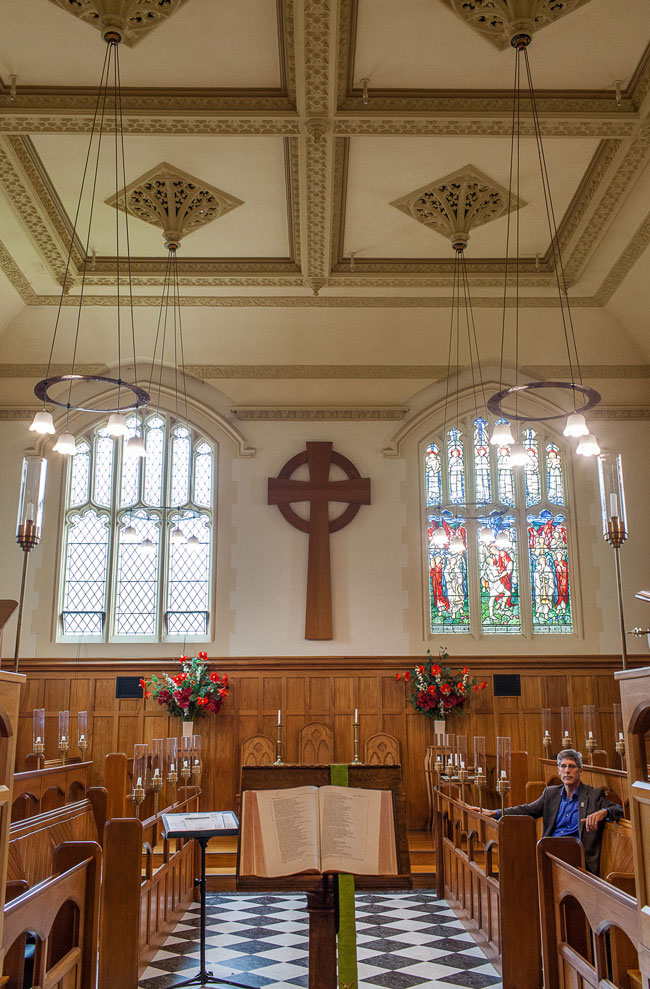 The Ross Chapel constitutes the spiritual heart of the college. The chapel is open 24 hours a day as a quiet place for prayer and meditation. Choral services are held there on Sunday afternoons during term time, as well.

Q. What would parents/whanau be surprised to learn about your college? About your role as head of college?
A. The fact that Knox College was founded by the Presbyterian Church means that the college affirms and encourages the spiritual dimension of human life. It’s part of our special character. Many of our residents value the opportunity to reflect on their personal belief systems, to explore issues of faith and spirituality, and to think about how these sorts of things connect with their academic studies. Weekly services in the beautiful Ross Chapel provide a forum for this sort of endeavour, as does our annual series of after-dinner addresses. This year’s theme was “Ethics: Doing the Right Thing”. Five speakers, representing five different professions (media, law, medicine, commerce and science), each offered a personal perspective on the subject. This aspect of Knox’s special character is about nourishing the soul as well as the body, and engaging the heart as well as the head. 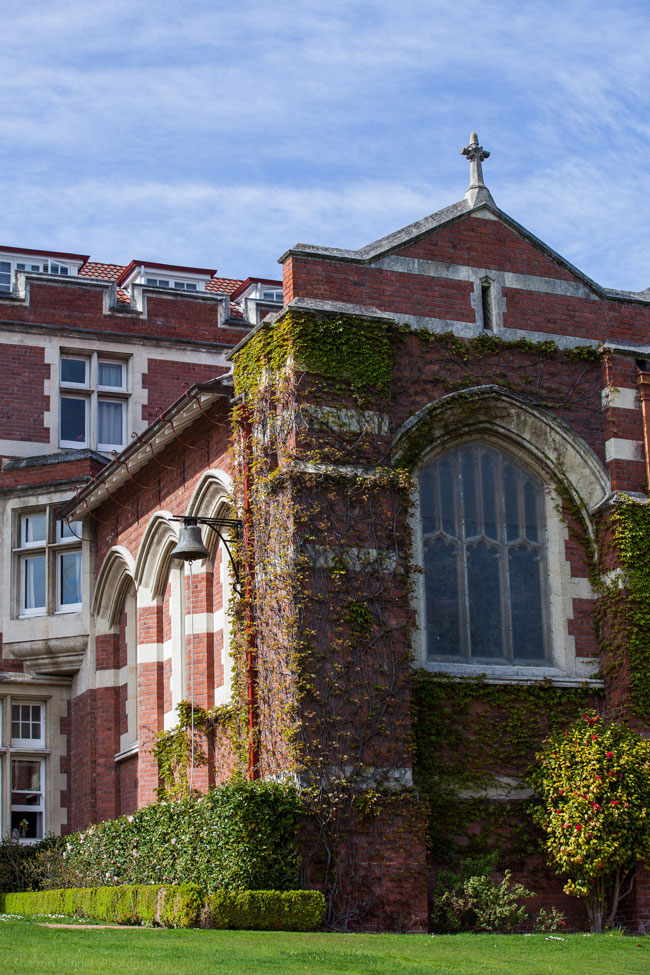 The exterior of Ross Chapel.

Q. Do you have anything you wish to add?
A. Since taking up the role of Master of Knox College I’ve been hugely impressed by the collegiality that exists between the heads of colleges in Dunedin, by the high standards of pastoral and academic support in each of the colleges, and by the massive investment by the University of Otago in developing a collegiate model of residential care that no other university in this country comes even close to matching. We truly do have something special going on down here … and that is worth celebrating.

View more photos from our recent visit to Knox College: 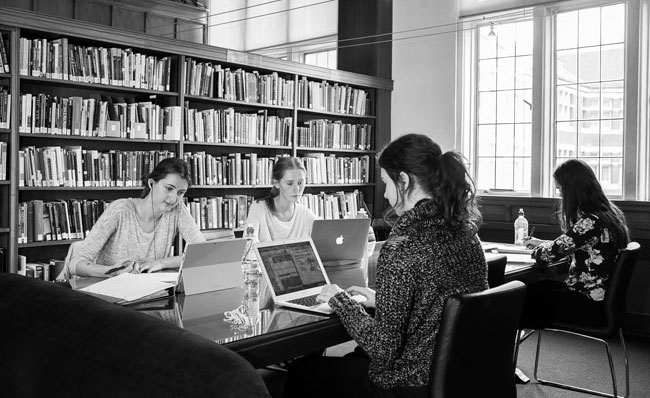 The college benefits from an on-campus library, the Hewitson Library, which provides both students and the public with access to its primarily theological collection, as well as providing a dedicated study space for students. 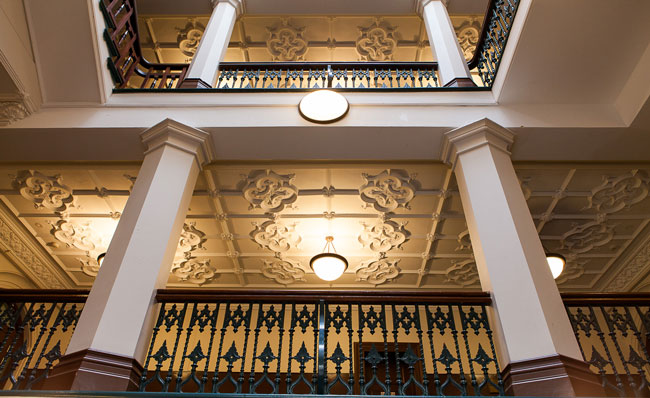 In 2011, the college’s main Tower Block underwent a major earthquake proofing and refurbishment programme, making it one of the safest and most beautifully maintained heritage buildings in the country. 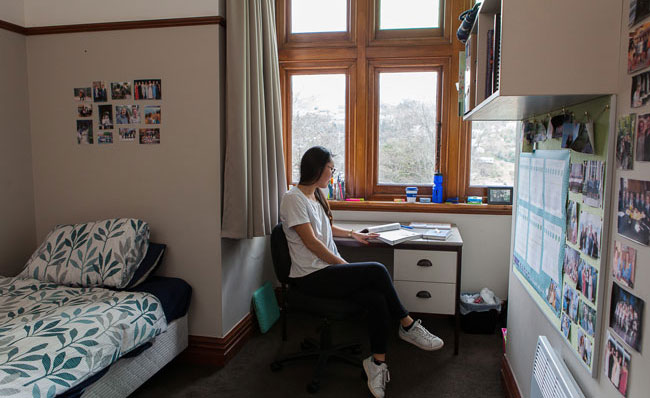 A room with a view – bright, airy and perfect for settling down to the business of University. 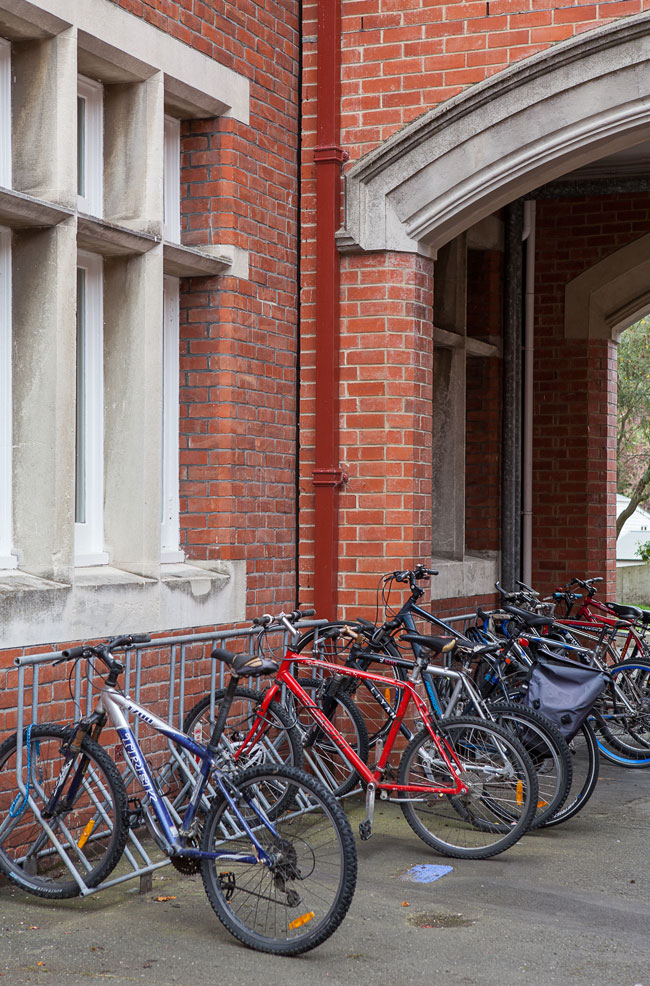 Opting for a bike trims the 15-minute walking journey to campus down to a mere five minutes.

Find out more about Knox College:

Knox College, founded by the Presbyterian Church in 1909, is one of New Zealand's oldest and best-known residential colleges. Affiliated to the University of Otago, it counts among its alumni no less than eighteen Rhodes Scholars. Situated on a tranquil bush-clad hillside site just 15 minutes' walk through Dunedin's Botanic Gardens to the University campus. The college is home to 262 undergraduate and postgraduate residents, about a third of whom are returners.
Address 3 Arden Street, Opoho, Dunedin
Tel 64 3 473 0107
Email admin@knoxcollege.ac.nz
Web www.knoxcollege.ac.nz