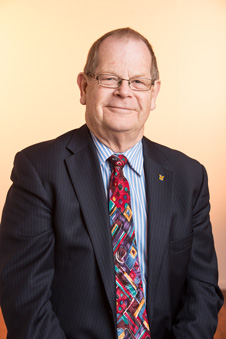 Professor George Benwell retires from the role of Dean of the University of Otago Business School today having contributed a great deal to the local business community as well as to the University.

The professor holds a Bachelor of Surveying from the University of Melbourne, an MPhil from City University, London and a PhD from Melbourne.

He started his career as a surveyor in Australia, and worked as a consultant, before taking up lecturing in surveying at the University of Melbourne. His research and teaching have been mainly focused on spatial information processing and analysis, and land and health-related information systems.

His first job at Otago was as a lecturer in the Department of Information Science. He served as the University’s Academic Director of Research, and later as the Business School's Dean of Research.

He then followed his natural inclination towards administration, and was appointed as Pro-Vice-Chancellor (Commerce) and the Dean of the Otago Business School in January 2007.

He says while he’s been an educator and a researcher, administration is what has given him a sense of contribution to the University.

He saw his role as Dean as three-fold - educating students to the best of School’s ability, encouraging staff to seek promotion, and positioning the School to have an impact on the New Zealand economy.

He says the last decade has been about setting an attitude of continuous improvement towards achieving all three.

"Coming from Australia, I have to say I didn’t have an in-depth understanding of the needs of indigenous people, but I’ve experienced a complete turnaround. My connections to our Māori students have challenged me and awakened respect and understanding."

That job started with unifying the departments and reinforcing the School as a single identity, which not only allowed operational efficiencies, but also presented a more integrated and positive face to the rest of the University, and to the business community.

“It’s vital for us to be connected to society in order to do our job of teaching well and to make it relevant – we’ve worked hard at building and maintaining vital connections between the Business School, New Zealand business and the community to make that happen.”

One shift in attitude he has overseen in the School is improving cultural diversity.

“Coming from Australia, I have to say I didn’t have an in-depth understanding of the needs of indigenous people, but I’ve experienced a complete turnaround. My connections to our Māori students have challenged me and awakened respect and understanding. I’m proud of the role I’ve played in advancing cultural respect within the Business School to better reflect society; I see how far we have advanced when I now return to Australia to visit.”

He’s also very proud of the Ignite business – a programme which connects students with a not-for-profit Dunedin organisation to put their studies to practical use in the community.

“I particularly like that we help but don’t interfere – it’s managed by the students themselves. They have the chance to achieve, and have established a great reputation in the community. What they are doing in the community and for their own development is inspirational,” he said.

“I don’t think the students truly realise it at the time, but Ignite represents a shift happening towards a more sustainable society where giving rather than taking is important. It’s great to be part of that movement.”

Professor Benwell has seen over 7500 students graduate, and has mentored many. As with any educator, he says there is immense satisfaction when you see something learnt that is understood and useful.

“I’ve always enjoyed student interaction, and observing that growth from inexperienced first years to adults making a real difference in society or who have built businesses from scratch. It’s a privilege to be part of that journey.”

The new Dean of the Otago Business School is Professor Robin Gauld.