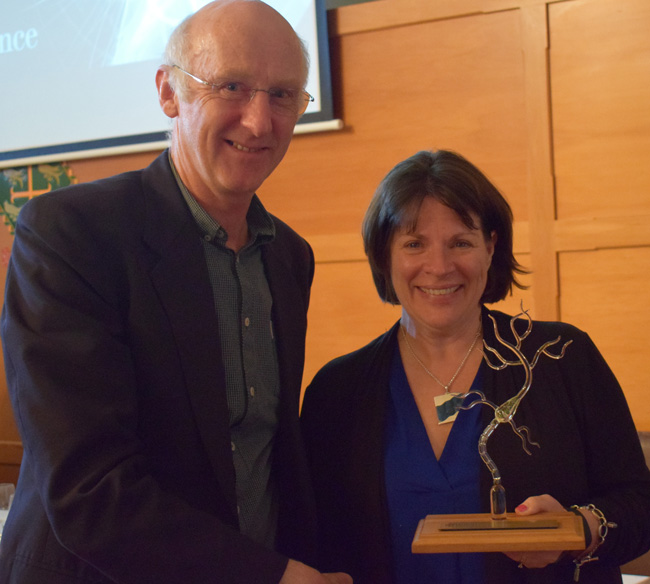 Winning a Special Award for Distinguished Service from the Division of Sciences is very special and very humbling for Professor Rob Ballagh of Physics.

The ceremony saw a suite of awards presented – acknowledging the excellent work done in many different areas of University life and work: research, teaching, community engagement, technical and administrative support.

"It is really important to celebrate success, especially in this way, where a large number of the academic and general staff meet in a social setting to celebrate the success of their colleagues."

Award recipients each received a sculpture created by the Division’s glassblower Anne Ryan, set on a rimu plinth made by the team in the Chemistry Department workshop.
Pro-Vice-Chancellor (Sciences) Professor Keith Hunter says, as with last year, the calibre of nominations was very high, resulting in a number of double awards.

“I think that this emphasises what great staff we have in the Division.

“It is really important to celebrate success, especially in this way, where a large number of the academic and general staff meet in a social setting to celebrate the success of their colleagues. We are really grateful that the Vice-Chancellor has been able to come both times to support the event.”

The evening culminated in Professor Ballagh’s Distinguished Service Award – which Professor Hunter says recognises his “sterling service to the Division and the University, as a researcher, teacher, former HOD and member of many committees and working parties.”

Professor Ballagh joined the University in 1979 as a postdoctoral fellow and subsequently became the inaugural Beverly Fellow in 1981. He was appointed as a permanent member of the Physics Department in the same year, and has remained in the Department since that time.

"So this award is very special for me, since no accolade could mean more than to be recognised by my peers for my own contribution."

In 2001 he was awarded a personal Professorship at Otago, and has held visiting Professorships and Fellowships at universities in Australia, the United States and Europe. He became a Fellow of the Royal Society of New Zealand in 2000, and served a term on the Marsden Council. He is currently a Trustee of the Rutherford Foundation.

Professor Ballagh’s research is in the field of quantum theory, focusing particularly on the interactions of atoms and radiation, and the behaviour of ultracold atomic gases.

Professor Ballagh was very humbled to receive this award.

“It is a privilege to have had a long tenure in the Science Division, during which I have seen its strength in teaching, research, and organisation continually grow,” Professor Ballagh says.

“This progress is due to the commitment of my many highly talented colleagues across the disciplines, who make it an inspiring place to work. So this award is very special for me, since no accolade could mean more than to be recognised by my peers for my own contribution.”

Professor Hunter anticipates the awards will become an annual event and expressed his thanks to all of those who were involved in organising the event.

The 2016 Division of Sciences Award winners:

Early-Career Teacher of the Year
Dr Will Rayment (Marine Science)