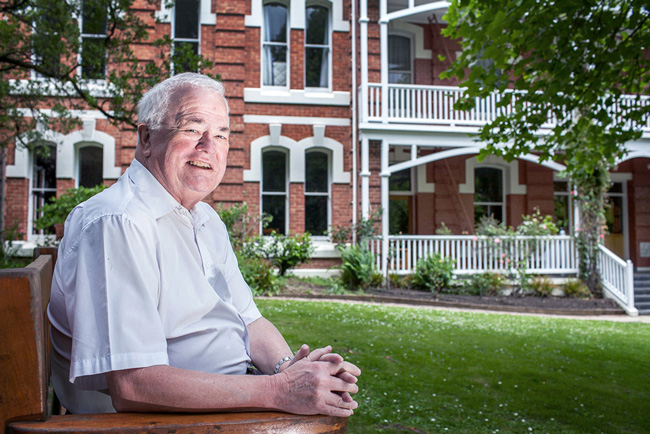 There is a lot that retiring St Margaret’s College Master Reverend Dr Peter Norris will miss after 28 years in the job.

The pastoral care that ensures students have a fully-rounded education, seeing young people learn, grow and develop into good human beings, and the traditions that make the hall of residence such a special place have all been a rewarding part of the Master’s role.

Dr Norris retired as Master of St Margaret’s earlier this month, but will continue his career in education, teaching church history at a seminary in Suva next year.

Born in Westport, Dr Norris entered the priesthood to help people. He has since studied widely, including at Otago and at the University of Notre Dame. He has served as a chaplain, a College master for a residential college, been a teacher and lecturer, and an author.

"I put that down to the environment and the dedication of our staff – my role is to co-ordinate everything but I would be useless without good people."

Studying at Otago influenced his decision to seek the role at St Margaret’s. The College was an all-female residence from 1911 until 1981, established as Presbyterian accommodation for the care and protection of young women.

It had always had women in the top job, so as a Catholic priest he wasn’t sure of his chances of appointment. However, the Board thought it would be good to have change of guard, and Dr Norris recalls everyone was very welcoming of the first male College leader. “I’ve often been asked what it was like, but actually people were very accepting and supportive.”

One of the first things to address was filling the College, which was not at capacity. The halls of residence were not promoted as a feature of Otago back then, so he took the initiative and visited secondary schools to let students know that St Margaret’s College was a good accommodation option.

The recruitment drive paid off, ensuring the College today operates at capacity.

Over the years with building and renovation, student numbers increased from 147 to 227, incorporating a mix of New Zealanders and international students. About half of those students are returning students who assist with first years.

Dr Norris recalls student behaviour was a challenge back in the 1980s, but is not now.

"We want students to grow and develop as people so the student experience at Otago is crucial."

However, student conduct has been replaced by other challenges, such as depression. Students today work harder than in the 1980s , so it’s important to have processes in place to manage mental health; he has taken the lead by bringing in a psychologist to help when needed.

Dr Norris has overseen the increasing importance of tutoring in the College, from two tutorials a week to 27, a crucial part of college life and something that sets Otago’s residential colleges apart from those at other universities. He has a lot of satisfaction in knowing that St Margaret’s students have a very good academic success rate.

“I put that down to the environment and the dedication of our staff – my role is to co-ordinate everything but I would be useless without good people. We put a lot of effort into making sure everyone knows each other on their floor when the students first arrive and that they trust staff, and the rest follows.”

“We have a philosophy of pastoral care rather than just student management.”

He strongly believes education should be about the whole life.

“People who push themselves academically can be technically competent, but useless as a person. It’s important that universities maintain their role about producing people who are participating and engaging, not simply memorising facts. We want students to grow and develop as people so the student experience at Otago is crucial.”

However, one of the things Dr Norris will definitely not miss is being the first to deliver a reality check to a young person. “It is not pleasant being that authority figure that says to a student they’re not actually doing enough to survive the course they’re set on, when they have been programmed by their parents and the education system over their first 17-18 years to think they’re capable of anything and aim to be Prime Minister. It’s often the first time in their lives they have not had such blind support– in the long run the student is thankful but it’s hard to do.”

Despite seeing many changes over almost three decades, some traditions remain, and the formal Sunday dinners with invited guests have always been popular.

"There’s so much I’ll miss ... it’s now time for someone else to lead the change."

One of the other nice traditions at St Margaret’s is cultivating an ethos of volunteering. All students give up a day to help in the community, and they also host concerts for Friend link. Some go on to support the charity throughout the year.

“I am proud that our students assist others at the start of the year and also during the semesters, and proud that we have so many kind people living here. It’s lovely to see them realise that helping others is part of life.

“Many of the students want to stay until the end of the year rather than leaving at the end of exams, which to me is indicative of the environment we have now established. My hope is that St Margaret’s retains its independence as a college.”

Dr Norris has always made a point of meeting each new student every year to get to know every student and is often seen chatting in the St Margaret’s Atrium.

“I often have students getting back in touch to share their successes as they move forward in their careers, which is always nice, although the good part about retiring is not having to remember so many names.”

“There’s so much I’ll miss; it’s hard to make the decision to leave while people still want me to stay but is very satisfying to see the building develop, to know that St Margaret’s has a stable workforce, and that the students are happy; it’s now time for someone else to lead the change.”