Glass and politics on radar for new OUSA president 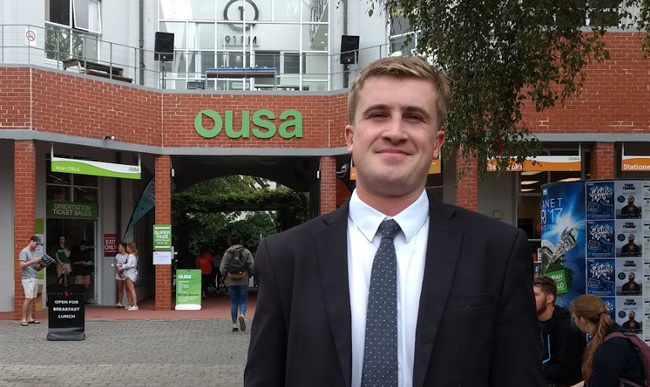 As last year’s Editor of Critic, the new President of the Otago University Students’ Association (OUSA) Hugh Baird is not unfamiliar with the issues affecting students.

Mr Baird grew up in South Canterbury and has recently completed a Bachelor of Commerce degree at Otago.

As OUSA president in a New Zealand general election year he hopes to help put students’ concerns onto the radar of campaigning politicians. The Otago Bulletin Board caught up with him during orientation week to learn more about his aspirations for the year.

Why did you want to be OUSA president?

I had a bit of an insight into what the role involved as Editor of Critic last year and thought it was a challenge that I wanted to give a crack. I also thought the role would be an incredibly rewarding one, with the ability to actually be able to have a say in those matters that are affecting students and hopefully to influence some of those decisions for the betterment of student life here at Otago.

What do you think that your previous experience as Critic editor allows you to bring to the role?

I think just having the understanding of the way in which the organisation runs as a whole and its relationships within the University environment is an advantage. Also I think that being able to build relationships with people both internally and externally last year means that I am are able to hit the ground running a little bit.

How do you feel coming into the New Year and your new role?

Excited mainly. I think when you come in at the start of the year, with a new executive team it is a great opportunity to start fresh and canvas some new initiatives. Personally, I'm excited to learn, as I think it is a pretty unique situation to find yourself sitting on some of the boards, or even the University Council at such a young age, and it is a great opportunity to learn as much as you can, as well as trying to contribute.

What do you think the challenges facing the OUSA are?

Being an election year, I think one of the biggest challenges for OUSA will be looking to push students’ concerns to the forefront of the political agenda. I think students face growing hardship at the current moment, with costs growing exponentially in the face of stagnant loans and allowances. Trying to communicate this to those in the political arena, or to get them to act on it will be an uphill battle throughout the year.

I understand you one of your priorities for the year is to increase glass recycling in the student quarter – why is this a focus?

Glass and rubbish is a huge problem around the student quarter, and students come under a lot of criticism a lot of the time for that, but I think a lot of the problem lies with the fact that at the current moment there isn't the appropriate infrastructure to deal with it. I think it is a bit unreasonable to assume that a flat of six people for example should be expected to keep their glass to one tiny blue bin for a fortnight. I think you'd struggle not to have the thing overflowing with pasta jars alone.

Orientation is a huge event for the OUSA – how is it going?

Very well thank you! Orientation is obviously such a huge event not just for OUSA but the city as a whole. The events team has done a fantastic job at putting together such a packed week and a lot of credit and congratulations has to go to them, in particular Dan Hendra, who after 10 years at the helm of Orientation will sadly be moving on.

Despite a change to the University Council structure in recent years, OUSA has retained its voice, how important is that voice around the council table?

Hugely. Whilst it is disappointing to have that number of seats at the table cut back to one, I think it is still hugely important to have a student representative there to comment on all things pertaining to student interests. I think the University has also been great in looking at ways to get student representation not only at the Council, but right throughout the organisation.

What next after this year?

Great question, certainly nothing set in stone yet. I do however have a keen interest in the world of business, so perhaps something business related, although broadcasting is something that I have long been interested in as well. So who knows, I'll have to make my way through this year first!