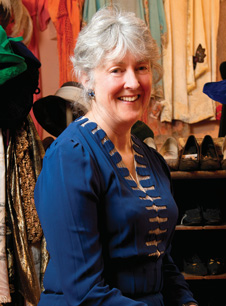 Professor Barbara Brookes of the Department of History and Art History has made the finals of the 2017 Ockham New Zealand Book Awards with a book that explores the role of women in founding and creating the New Zealand we know.

Her book, A History of New Zealand Women, is a finalist in the Illustrated Non-Fiction category of the awards, up against Warren Moran’s New Zealand Wine: The Land, the Vines, the People; Peter Simpson’s Bloomsbury South: The Arts in Christchurch 1933-1953, and Ann Shelton: Dark Matter edited by Zara Stanhope.

Professor Brookes says she is thrilled to be a finalist in the awards, which were announced this week.

“It is great to make the shortlist,” Professor Brookes says. “I think the book is beautifully illustrated and I’m delighted the judges have appreciated the care and attention taken to use the illustrations to extend the text in various ways.”

"The book is a culmination of a long career of teaching and writing about women’s history. I’ve had lovely messages from people I’ve never met about how much they’ve valued finding about women’s past."

The ground-breaking book, released in February last year, is a comprehensive history of New Zealand seen through a female lens.

In it, Professor Brookes argues that while European men erected the political scaffolding to create a small nation, women created the infrastructure necessary for colonial society to succeed. Concepts of home, marriage and family brought by settler women, and integral to the developing state, transformed the lives of Māori women. The small scale of New Zealand society facilitated rapid change so that, by the twenty-first century, women are no longer defined by family contexts.

“The book is a culmination of a long career of teaching and writing about women’s history. I’ve had lovely messages from people I’ve never met about how much they’ve valued finding about women’s past. These messages of appreciation from members of the public have meant a lot to me.”

For Professor Brookes, the book was also an opportunity to make the work of many students who chose to explore topics in women’s history more accessible through drawing on their research for her book.

“Their interest and excitement fed mine.”

Four finalists were named in four categories: Fiction, Poetry, Illustrated Non-Fiction and General Non-Fiction. The 16 finalist books were selected by four panels of three specialist judges and were drawn from 40 longlisted titles out of a total of 150 entries.

The winners will be announced at a ceremony in Auckland’s Aotea Centre on Tuesday 16 May.