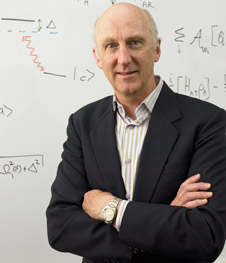 Professor Rob Ballagh, who has been a member of the University for 37 years, is to retire at the end of this week, but intends to keep contributing to the Department of Physics and the wider institution.

Professor Ballagh, a widely respected academic who joined the Department in 1979, says his decades of working with colleagues and students have been an “incredible privilege and a real pleasure”.

“Through the determined efforts of my very talented colleagues over many years, I have seen the Department grow into a ‘research powerhouse’ that attracts considerable external funding.

“At the same time my departmental colleagues have also shown a real passion for teaching. There has been a deep commitment to improving the learning experience of our students, and we have applied insights on teaching from colleagues around the world.

"Through the determined efforts of my very talented colleagues over many years, I have seen the Department grow into a ‘research powerhouse’ that attracts considerable external funding."

“For example, there is much more active learning in our classrooms nowadays, and by using technology such as ‘clickers’ to get real-time feedback from students, our lecturers can focus on the concepts the students are finding most difficult.”

Professor Ballagh was Head of Physics from 2008 to 2011 and has continued to serve on numerous high-level committees and lead important reviews. Last year he received an exceptional career contribution award from the Division of Sciences for his key role in achieving the “critical mass of research excellence in quantum science” in the Department.

His nomination for the career award additionally noted his “huge role in the leadership of teaching” and his contributions to the wider University, which included mentoring a number of new Heads of Department.

Professor Ballagh intends to maintain strong links to the University, including continuing the supervision of his final PhD student.