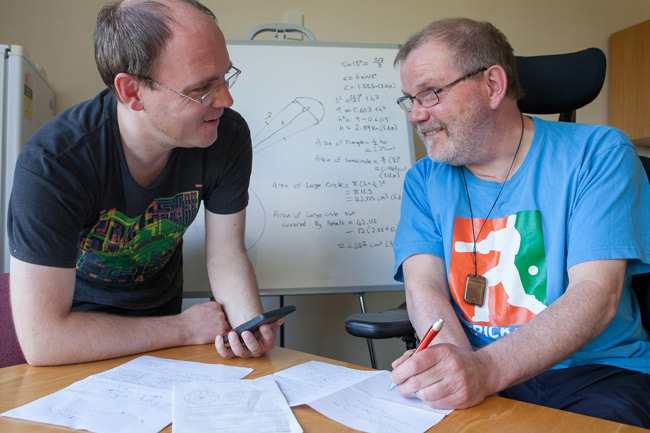 About 6,500 Year 9 to 11 pupils from about 150 schools around New Zealand took part in the University of Otago Junior Maths Competition last month, attempting to answer up to five questions which require them to apply their mathematical skills to unknown situations.

“Students have one hour to answer as many as they can manage in the time,” Warren Palmer explains. “Just occasionally someone finishes all the questions completely.”

"I spent five months looking at ceilings. A colleague (Dennis McCaughan) kindly wrote the fifth question, and Loas my wife and Chris ran the competition that year."

The competition was created in 1985 by Professor Derek Holton and is sponsored by the University’s Division of Sciences.

Warren and Chris write the questions throughout the year when they think of an idea (or when a colleague suggests something), trying to make them interesting, relevant, and with enough surprise that students have to think how to apply their mathematical skills to unknown situations. This year’s questions were about the weather (including averages), prime numbers, mathematics in The Simpsons, parameters, and a Daisy-like logo.

Warren believes the competition provides something which the Mathematics syllabus seems not to provide sufficiently: problem-solving or thinking outside the square, “so important in today's rapidly altering technological whirlpool”.

A secondary school maths teacher for 22 years, Warren joined the University in 1998. In the early 2000s he marked some of the competition papers, and shortly afterwards took the part-time role of competition manager.

In January 2008, he had fortunately written four of the five questions for the competition when he had his stroke – rendering him totally paralysed and unable to talk.

“I spent five months looking at ceilings. A colleague (Dennis McCaughan) kindly wrote the fifth question, and Loas my wife and Chris ran the competition that year.”

The competition remains a family affair, with Loas doing the bulk of the physical work. Department of Mathematics and Statistics Finance Administrator Leanne Kirk also helps, with Warren taking on more of the computer work and a greater share of the marking as the years have passed.

"We actually get on very well. We both give each other a hard time, especially when Dad makes a mistake (not uncommon)."

Chris works as an IT specialist in the Department, and over the years part of his job has evolved into aiding the competition. He 'plays around' with the computing side of the competition and has brought it into the 21st century, his father explains.

Working together on the competition is fine, Warren says.

“We actually get on very well. We both give each other a hard time, especially when Dad makes a mistake (not uncommon).”

Despite his ongoing physical disabilities, Warren counts himself lucky. At 55 he understands that he was the oldest survivor of this type of stroke in the country.

“Life in an electronic wheelchair can be fun (a bit of sarcasm there) but I am extremely grateful that I have made some physical gains. A brain-stem stroke is usually fatal or leaves you 'locked-in'. I was totally paralysed and unable to speak at first but even now I am making (slow) progress despite my advanced years.”

The stroke forced him to abandon his PhD studies, but hasn’t affected his brain, and he says he needs the stimulation that running the competition provides.

His other main stimulation is bridge – which he has taken up since his stroke.

The pair hope more schools will take up the opportunity to participate in the competition in future years. Numbers were up this year, thanks to increased promotion.

Could you answer a question from this year’s competition? Give it a go:

In one episode of The Simpsons the crowd at a baseball game was asked to guess the attendance. There were three options: 8128, 8191, and 8208. All three numbers are interesting from a mathematical point of view.

Think you have the answer? Contact Warren to check, Email: wpalmer@maths.otago.ac.nz