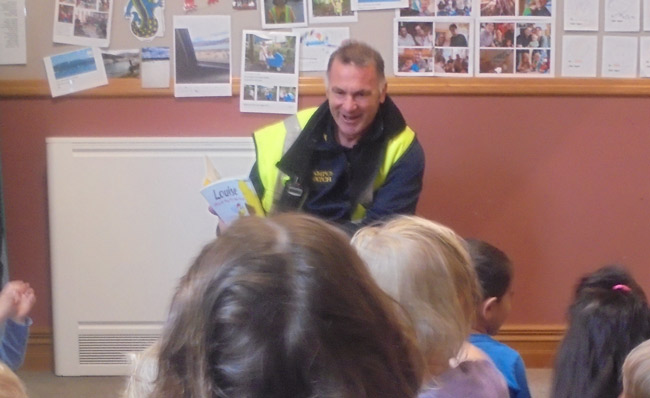 Stephen Crosland takes a break from his Campus Watch duties to read his new picture book to the children at Te Pārekereke o te Kī, the bilingual unit at the University’s Childcare Centre on Castle Street.

Stephen Crosland is living a double life: between his shifts on Campus Watch’s Delta Team, providing pastoral care to students, he has also launched a new career as a children’s author.

Mr Crosland’s first book Louise Stuck Up To Her Knees was published in January this year, while his second book The Land Of Mud is set to be published next year.

He recently read his book to the children at Te Pārekereke o te Kī, the bilingual unit at the University of Otago’s childcare centre on Castle Street.

"I think as well as being entertaining a story should contain a message for children to learn from."

“The reading seemed to go very well. The children were fantastic and I even got a hug from one of them,” Mr Crosland says. “When the story was finished, the children preformed a brilliant waiata. The teachers were lovely and seemed to welcome the involvement from the wider University community.”

The book was inspired by Mr Crosland’s granddaughter, Devon, who asked him to write her a story. The story itself came to him during a visit to the Beehive in Wellington.

“I thought what would happen if the Beehive leaked and so began the story. The story is about Louise being stuck up to her knees in a puddle full of sticky ooey gooey runny honey.”

Mr Crosland says he enjoys writing, finding it “quite cathartic”.

“I think as well as being entertaining a story should contain a message for children to learn from. In this case, the story is about teamwork, and if there is a problem and one solution doesn’t work, to look for another. When Louise is stuck in the puddle of honey and can’t be pulled out, all the animals start to eat the honey to free Louise.”

"Steve is the nicest person, and thoroughly deserves every success that comes his way."

“Sometimes when I’m on a roll the lawns don’t get mowed or tea doesn’t get cooked.”

Mr Crosland’s Campus Watch colleagues are thrilled with his success.

Executive Assistant to the Proctor Kerri Fraser says it’s a lovely read and the Campus Watch teams are really happy for Mr Crosland.

“We’ve always known he has a way with words,” she says. “In his position as Relieving Team Leader his shift reports are often amusing, and always enjoyable. Steve is the nicest person, and thoroughly deserves every success that comes his way. I have a signed copy that I am counting on becoming valuable one day.”