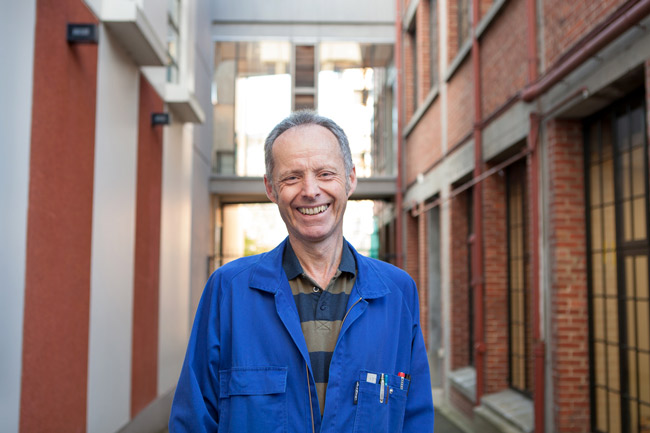 Murray McKenzie may have worked at the University of Otago for 47 years, but no two days have ever been the same for the Zoology technician who is retiring this month.

Mr McKenzie started work in 1970 for the Physics Department, starting work in the brand-new Interim Science Building (now the Information Technology Services Building) across the Leith.

He feels fortunate to have started work in a University department that had comprehensive mechanical, welding, sheet metal, electronics and instrument workshops. It gave him the opportunity to work and be trained alongside qualified tradespeople who made and repaired equipment for teaching and research in the department.

The role as technician was to support teaching and research, but it wasn’t long before he was encouraged to study towards a NZ Certificate in Electrical Engineering. This set him up well for the future, and for becoming a Registered Engineering Associate at a later date.

"It’s not just working from a workshop to manage equipment, I love knowing that I’ve had a small part to play in the University’s research [and in] ensuring that the students achieve their qualification goals."

In 1976, he became sole charge workshop technician for the Zoology Department, and has been there ever since.

“People ask me how I could be in the same place for so long, but it’s not the same job – I’ve developed a career along the way. And the skills learnt plus the freedom and encouragement to think outside the box to problem-solve issues in the name of research meant the job was never ever dull.”

He’s loved the interaction with students over many years, who often come up with an idea, then need the technical input to make it possible – he’s built all sorts of unusual equipment.

He’s also loved the variety of the problems he’s solved for teaching, and the support that he’s provided for ensuring equipment is working seamlessly, in the laboratories and off-campus.

He was involved in adapting a series of electronic balances and building a system to install them under nests at the Albatross colony on the Peninsula to measure and record the weight of newborn chicks. He was invited to be a co-author with PhD student Junichi Sugishita in the subsequent paper.

He built a system at the Kauru River to analyse the effect of nutrients, sediment loads and runoff into streams. A duplicate system was built as part of a collaborative project with a German university in Bochum, and because they had little fieldwork experience, he travelled to Germany to assemble the kitset.

The problem-solving challenges are what he will miss the most.

“It’s not just working from a workshop to manage equipment, I love knowing that I’ve had a small part to play in the University’s research over many years, and played an important role in ensuring that the students achieve their qualification goals.”

Mr McKenzie was appointed Senior Technical Officer in 1988, the job including supervision of Zoology Department technical, clerical and IT support staff. While he’d always been good at sorting equipment, he was able to extend his practical problem-solving skills to people.

"I didn’t know all those years back I would end up in this career but feel privileged to have found something that suited my skills, and where I was well supported."

He played a key role as first point-of-contact for the design of the department’s new Benham and Parker buildings in that time, utilising his electrical and mechanical engineering knowledge to work with engineers and architects, while also representing teaching, support and students’ needs. He also contributed to planning of the Marples Building refurbishment, and is proud of how its heritage has been maintained while facilities were bought up to standard.

His efforts were recognised when he received a general staff award for exceptional performance in 2005, receiving $5000 towards personal development, which he used to attend an Outward Bound course.

He relinquished his senior position two years ago to prepare for retirement, returning to the role of Electromechanical engineer.

“The job has been my hobby – I never stopped enjoying coming to work. I didn’t know all those years back I would end up in this career but feel privileged to have found something that suited my skills, and where I was well supported. I’m fortunate the University offered professional training from the beginning – it’s been a great place to learn and work. It’s a lovely campus to be on, and whilst I may be biased, Zoology is a fantastic department.

“Zoology is a very collegial and friendly department where you are recognised for the skills you have and the contribution those skills make to the overall running of the department.”

He retires on 14 May, and has many projects lined up in his well-equipped workshop, including restoring motorcycles, a model railroad under construction, and helping his daughter with some house renovations.