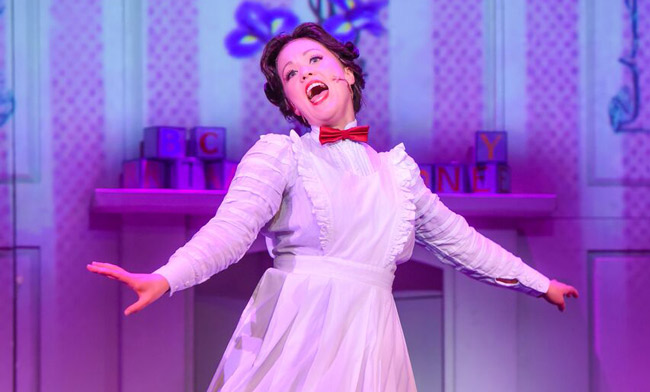 The Otago Theatre Studies graduate and Executive Assistant to Deputy Vice-Chancellor (Research and Enterprise) Richard Blaikie is the star of the Taieri Musical and DKCM production of the 1964 Disney and Sherman Brothers classic, currently being staged at the Regent Theatre.

Alongside her on the stage are two more University of Otago staff members - Alethea Chittenden (Course Advice Service in Admissions and Enrolment) plays Miss Andrew, while the Department of Music’s Arlie McCormick is The Bird Woman.

"...everyone in the show is dedicated to their art and this is their passion so we all worked hard, but had a blast at the same time."

The three experienced actresses agree the show has been hugely hard work and exceptionally enjoyable.

For Miss Shaw Bennett, the opportunity to play the title role of a production in her home town has been both thrilling and a great responsibility.

“The scale of Mary Poppins is massive and we all knew at the start of the rehearsal period that the quality of the product that we wanted to bring to Dunedin required a lot of hard work and dedication. However, everyone in the show is dedicated to their art and this is their passion so we all worked hard, but had a blast at the same time.”

Miss Shaw Bennett graduated in 2009 and has been performing since then in New Zealand as well as overseas. She returned from London in 2015 and started working for the University at the end of last year.

While she grew up watching Mary Poppins, she says in playing this part she has become very aware of just how inspirational her character is.

"I love her because she is such an individual. She marches to the beat of her own drum, but then somehow has everyone marching along behind her. I also have been struck by so many of the themes that this production explores of what really is important in life. I love this notion that there are people that can come into your life for a brief period of time yet can profoundly change it for the better. I think that is a beautiful message." 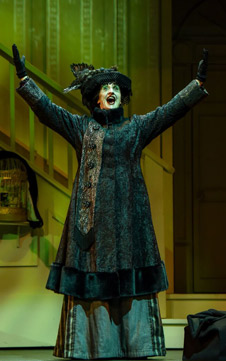 The 10-show production opened last Thursday, and will finish on Saturday. But preparation began back in February with three to five dance and music rehearsals each week, and becoming increasingly intense as opening night looms.

Miss Chittenden, who has been involved in musical theatre in Dunedin for over 20 years explains: “There’s a period about a three weeks out from opening night when you can’t remember what it feels like not to be exhausted but we only have a few months to make the most of this amazing experience so you dig deep and push on through. It’s gruelling but absolutely worth it.”

Her character, Miss Andrews, is the antithesis of Mary Poppins – a cruel and overbearing bully.

“Villains are always so much fun to play. You get to indulge in truly awful behaviour. It’s very liberating.

“Miss Andrew appears on stage for two short but memorable scenes – not long at all when compared with other principle roles I have played. However, when she is on stage she goes like a freight train. The role requires an enormous amount of energy.”

She says she is thrilled to have had the opportunity to work with Miss Shaw Bennett for the first time and to get to know her.

“Nadya’s a gem and we are so lucky to have her here in Dunedin,” she says. 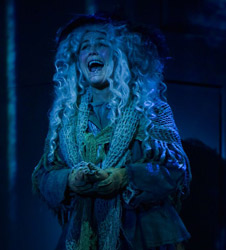 The Department of Music’s Arlie McCormick on stage as The Bird Woman.

And for the third Otago staff member in the show, Ms McCormick, landing the role of The Bird Woman is made more special because she gets to share the stage with her 10-year-old daughter Samantha.

Samantha, a Year 6 pupil at St Clair School, is one of two girls who alternate playing the part of Jane Banks.

“It has been incredible seeing my daughter become an amazing actor, singer and dancer. As a mother, it’s been wonderful to witness,” Ms McCormick says.

The family moved to Dunedin from Australia last June – and while Ms McCormick has an extensive background in musical theatre in Australia, she says it was a wonderful surprise to get this part.

“Also working on the show has been a great way to meet new people and feel part of a community.”

Miss Chittenden agrees: “Mary Poppins is easily one of the largest, most ambitious, most spectacular and most eagerly anticipated productions staged in Dunedin in recent years and it is a true privilege to be a part of it,” she says.

“The past few months of rehearsals spent with the warm and talented cast and crew led by creative team Doug Kamo, (Director) Michael Grant (Musical Director and Otago alumna) and Emma Holloway (Choreographer) have been an absolute pleasure, as has being part of bringing such a beloved, heart-warming story to life for Dunedin audiences to enjoy with their loved ones.”