However Professor Lyn Tribble of the Department of English and Linguistics, who teaches and studies Shakespeare’s role in society and is on the Board of the Shakespeare Globe Centre New Zealand (SGCNZ), argues that the value of Shakespeare’s work is that it can be transposed into modern settings. 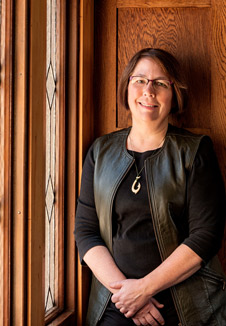 This year the SGCNZ University of Otago Sheilah Winn Shakespeare Festival featured a Julius Caesar set in post-Trump America. Caesar sported big hair and a long red tie; Calpurnia spoke with a Slovenian accent, and a brass band played “Hail to the Chief” on the way to the Forum. The scene ended with the conspirators shouting "Liberty! Freedom! Tyranny is dead" around the corpse of Caesar. The New Zealand audience was appreciative but unfazed.

But a Trump-themed professional production in New York City has provoked outrage. Under the headline NYC Play Appears to Depict Assassination of Trump, Fox News reported that The Public Theatre’s show "depicts President Trump being brutally stabbed to death by women and minorities”. Donald Trump, Jr. tweeted "when does art become political speech, and does that change things?"

In the aftermath of the controversy, Delta Airlines and the Bank of America pulled their sponsorship of the play, with Delta stating that the "graphic staging" of the assassination did not accord with its "values" and Bank of America noting that "it did not condone . . . its depiction of political violence in a modern context". Reviews make it clear that the Shakespeare in the Park production deliberately courts connections between Trump and Caesar, thus placing it in a long tradition of drawing parallels between contemporary political moments and Shakespeare’s plays.

"The “graphic staging” of Caesar’s death should be shocking; Shakespeare meant it to be."

The "graphic staging" of Caesar’s death should be shocking; Shakespeare meant it to be. And no doubt some in the audience might cheer to see a trumped-up Caesar killed on stage to cries of "Tyranny is dead!" Shakespeare’s play unleashes a panoply of emotions following the death: elation, triumph, horror, terror. As with plays such as Richard III, Hamlet, and Macbeth Shakespeare explores the brute fact of killing. Murder is irrevocable; it forever changes the authors of the deed and its consequences are always unforeseeable. Caesar’s assassination unleashes havoc upon Rome, ignites mass terror, allows demagogues full rein, and ultimately ushers in a much smoother and more plausible version of tyranny in the person of Augustus. The play scarcely endorses murder as a solution to political disputes. Brutus’s command to the conspirators to bathe their "hands in Caesar’s blood" and wave their "red weapons o’er [their] heads [crying] peace, freedom, and liberty!" perfectly conveys the paradoxes of political murder: their bloody hands give the lie to their claims of peace.

For these reasons, Delta’s bland PR statement about "values" rings false, as does Bank of America’s disapproval of "political violence in a modern context". Shakespeare’s plays are always in a "modern context". It is in the clash between the complexities of the texts and the context in which we experience them that Shakespeare’s meanings are formed and re-formed. It is why they still breathe today.