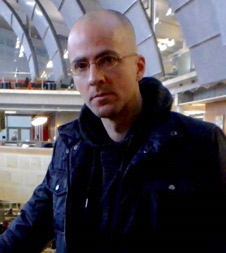 The University’s 2017 Carl Smith Medal and Rowheath Trust Award winner, Dr Kourken (Kirk) Michaelian of Philosophy, credits the exceptional research environment provided by Otago for the rapid progress he has made on his work.

The Award and Medal, which recognise outstanding research performance of early-career staff at Otago, are accompanied by a $5000 grant for personal scholarly development.

Dr Michaelian (aged 40) is an internationally leading philosopher of memory. He was named as the winner earlier this month.

His 2016 book, Mental Time Travel: Episodic Memory and Our Knowledge of the Personal Past, published by the Massachusetts Institute of Technology (MIT) Press, provides compelling arguments that remembering is a matter of imagining past events, rather than reproducing past experiences. Last year he also received a prestigious Fast-Start grant from the Marsden Fund of New Zealand to study collective memory.

In addition, since arriving at Otago in 2015, he has produced 15 articles and book chapters that have been published or are forthcoming. He is also working on editing a third book and has attracted doctoral students from Canada and Brazil.

"More than anything else, there's a real recognition – at the level of the Department, the Division, and the University as a whole – of the value of research and its importance to the mission and the profile of the University."

Dr Michaelian says his prolific research output is in a large part due to the exceptional research environment provided by the Department of Philosophy, the Division of Humanities, and the wider University.

“Staff members have reasonable teaching and administrative loads, which is crucial to freeing up time for research,” he says. “There's good support for travel to participate in conferences and visit collaborators, which is a vital means both of getting feedback and of communicating the results of one's research. There's also strong support for grant applications. More than anything else, there's a real recognition – at the level of the Department, the Division, and the University as a whole – of the value of research and its importance to the mission and the profile of the University.”

Before joining Otago’s Department of Philosophy in 2015, Dr Michaelian worked for several years at Bilkent University in Turkey and at the Institut Jean-Nicod in France. His PhD is from the University of Massachusetts and his MA and BA are from Carleton University and the University of Alberta, both in Canada.

He says he first became interested in the philosophy of memory by chance, when he was working on his PhD. At that point the topic was a relatively small area of philosophy, and he had planned for it to be the focus of a single chapter of his thesis.

"As I began to explore the literature, however, I realised that the topic was both hugely important and surprisingly underexplored. Memory ended up being the focus of three out of five chapters of my thesis and has been the primary focus of my research ever since. I'm pleased to say that a number of other researchers came to the same realisation at about the same time, and since then the philosophy of memory has grown into a recognised and highly active area of research.”

"There's no end of philosophical questions about memory, and many of these questions have only begun to be asked."

He says memory is of fundamental importance to philosophy.

“As one of our most basic cognitive capacities and sources of knowledge, it's of core interest in both the philosophy of mind and epistemology, but it's also highly relevant to other fields such as ethics.

“There's no end of philosophical questions about memory, and many of these questions have only begun to be asked. For example, the primary focus of the philosophy of memory has traditionally been on individual memory, but there's also a large interdisciplinary literature on collective memory. So far, few philosophers have been involved in these interdisciplinary discussions, but I'm hoping to contribute to changing that with my Marsden project, which aims to bring tools from social ontology to bear on the concept of collective memory as it's deployed in the social sciences and in psychology.”

Dr Michaelian will be presented with the Medal at a public lecture he will give in October.