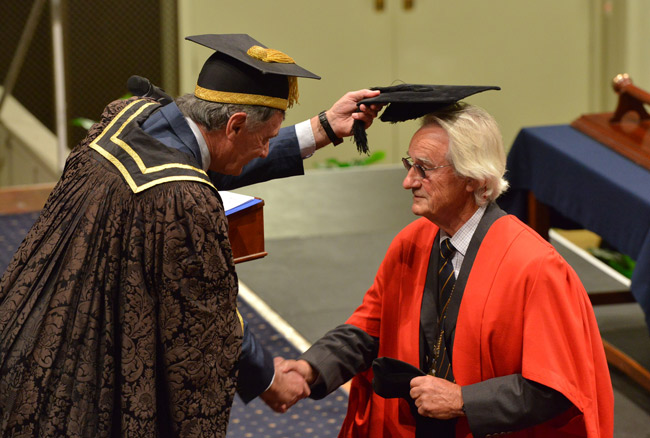 Staff at Otago’s School of Physiotherapy say they are extremely proud of Dr Stanley Paris – who became the first physiotherapist to be recognised by the University with an honorary doctorate degree during the August graduation ceremony last weekend.

Dr Paris, who graduated from the New Zealand School of Physiotherapy in 1957, is a pioneer in the areas of manual and manipulative physiotherapy, an endurance athlete and a noted philanthropist.

He generously continues to support research in the School of Physiotherapy.

Prior to the graduation ceremony, School of Physiotherapy staff celebrated his success at an event at the Staff Club.

Physiotherapy Deputy Dean Dr Margot Skinner says that while Dr Paris received his qualifications before Physiotherapy was part of the University of Otago, the School treasures him as an alumnus. And she says he has made them proud.

"Even as a student and young career professional he made his name in swimming, as the physiotherapist to accompany a New Zealand Olympic team, as an author of manual therapy texts and entrepreneur."

“Even as a student and young career professional he made his name in swimming, as the physiotherapist to accompany a New Zealand Olympic team, as an author of manual therapy texts and entrepreneur. All these attributes have also promoted the name of the School and the University.”

Along with his wife Catherine, who is also a Physiotherapist, Dr Paris continues to give his time to present to staff and students when he visits Dunedin, she says.

“He was very supportive of the desire of the profession to ensure that undergraduate physiotherapy programme was a University-based degree level qualification and continues to support the opportunities postgraduate education provides for the development of our own body of knowledge.”

Announcing Dr Paris’s selection for an honorary doctorate, University Vice-Chancellor Professor Harlene Hayne said he epitomises the Otago way as demonstrated by his devotion to advancing his profession, his appetite for adventure and his generosity of spirit.

“Stanley Paris has truly made his mark on his profession, and one that is overwhelmingly positive. He has been a tireless advocate of physiotherapy as something that can transform the quality of people’s lives. He is devoted to ensuring that patients can regain as much function as they can, rather than focusing solely on relieving the pain they feel.”

Dr Paris received his honorary degree, Doctor of Laws at the University’s graduation ceremony last Saturday, at which he also delivered the graduation address.

Alongside his professional interests, he is an athlete and adventurer. Dr Paris has the ambition to become fastest (and oldest) person to do a solo circumnavigation of the globe by a cruising yacht, and embarks on the trip in November in further support of the Foundation for Physical Therapy in the US, to which he and his wife Catherine Patla gave a $3 million gift earlier this year.

His many sporting pursuits include twice swimming the English Channel and completing the World Championship Ironman Triathlon in Hawaii - all in his later years. Last year aged 79, he motorcycled 9,000km from Prudhoe Bay, Alaska, to Key West Florida in under seven days and bicycled coast to coast across the United States in 30 days.